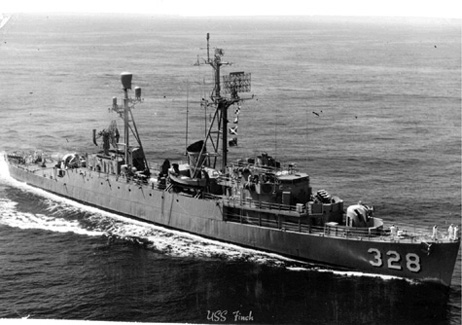 Finch arrived at Curacao, Netherlands West Indies, 7 March 1944, and from that time until 31 May, twice escorted convoys of tankers laden with vital petroleum products to Casablanca and Algiers. Extensive training in the Caribbean and in Casco Bay, Maine, prepared her for her departure from Norfolk 28 July screening shipping to Naples for the assault on Southern France. The escort ship returned from this voyage to New York 31 August.

Between 29 September 1944 and 8 May 1945, Finch sailed as escort to five convoys from New York and Boston to ports in Great Britain. Upon the end of the European phase of the war, the escort ship prepared for Pacific Fleet duty, and arrived at Pearl Harbor 12 July. She sailed on to Guam, where on 13 August she joined a carrier task force, which upon the cessation of hostilities was ordered into Leyte 17 August. Serving in the Far East until 1 April 1946, Finch took part in occupation activities including the evacuation of Allied men held as prisoners of war in Korea. For 4 months she was based at Hong Kong, calling at many ports in China, and carrying mail to Okinawa. She returned home by way of the Indian Ocean and Mediterranean Sea, thus concluding a round-the-world cruise with her arrival at Charleston, S.C., 29 May. Finch was decommissioned and placed in reserve 4 October 1946.

From 24 August 1951 to 23 April 1954, Finch was on loan to the Coast Guard and in commission as USCGC Finch (WDE-428). She served on weather station duty along the west coast and in the Far East during the Korean War. Upon her return to the Navy, she was converted to a radar picket escort vessel. She was reclassified DER-328 on 17 August 1956, and recommissioned 17 August 1956.

Seattle was Finch's home port from 17 December 1956 through 10 September 1958, as she made regular patrols on seaborne radar early warning duty. She arrived at Pearl Harbor 16 September 1958 for similar duty until 16 May 1960, then sailed for San Francisco, her home port for barrier operations through 1962.


Add Your Name to the
DE-328 Crew Roster