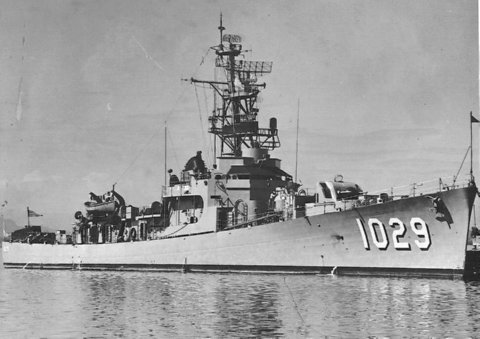 After shakedown in the Caribbean to test the latest and most efficient antisubmarine equipment, Hartley joined Escort Squadron 14 in Newport, R.I., for a series of ASW and convoy tactics exercises 28 January 1958. Departing Newport 12 May in company with CortRon 14, CortRon 10, and Wasp (CVS-18), Hartley deployed to the Mediterranean for operations with the mighty 6th Fleet. During the Lebanese crisis in July she patrolled off the coast of Lebanon as the 6th Fleet acted quickly and effectively to stabilize the tense political situation and to prevent the spread of violence to other parts of the unsettled Middle East. For the next 2 months she continued peace-keeping patrols and ranged the Mediterranean from Turkey to France. She returned to Newport 7 October.

After a series of ASW exercises out of her home port, Hartley sailed with CortRon 14 for an extended South American cruise 6 February 1959. American units joined ships from the Brazilian, Argentine, Uruguayan, and Venezuelan navies for intensive ASW training exercises. Hartley returned to Newport 5 May 1959 and engaged in further escort and ASW exercises until June 1960, when she entered Monroe Shipyard, Chelsea, Mass., for installation of a new high speed sonar dome. Hartley then served as Fleet Sonar School training ship at Key West, Fla., until November 1960.

Antisubmarine exercises out of Newport filled Hartley's schedule for the following 4 years, punctuated by occasional special operations. In October 1961, Hartley sailed to Norfolk to work with NASA research teams in improving shipboard recovery and space capsule egress procedures for American astronauts. After another tour with the Sonar School at Key West, Hartley prepared for BEAGLE II, a joint Canadian-American exercise which was cancelled because of the Cuban missile crisis in October 1962. In response to the Russian attempt to establish offensive missile bases in Cuba the United States established an effective naval blockade off Cuba. Vigilant American ships helped repulse this threat to world peace; and, operating off the East Coast, Hartley provided essential support during one of the most tense and dangerous international situations of the Cold War.

Since 1962, Hartley has continued operating in the Atlantic and the Caribbean. In March 1963, she conducted surveillance patrols off Cuba, and during the next 5 months she participated in extensive ASW exercises out of Key West and Newport. Early in September she entered the Boston Naval Shipyard where she underwent overhaul and modification. Equipped with the latest advances in sonar equipment and DASH, Hartley resumed duty 27 January 1964. During February and March she trained out of Guantanamo Bay and served at the Sonar School at Key West. Returning to Newport 8 April, sihe spent the remainder of the year participating in antisubmarine exercises which sent her from the Gulf of Maine to the Straits of Florida.

After conducting surveillance patrols and sonar training out of Key West during the early part of 1965, she was heavily damaged by Norwegian freighter Blue Master 16 June. As Hartley entered Chesapeake Bay in heavy weather, the merchantman hit the destroyer escort broadside, and her bow almost cut Hartley in half. She suffered no casualties but was extensively damaged in the engineering spaces. Prompt and effective rescue and salvage operations kept her from grounding; 19 hours after the collision, she reached Norfolk under tow.

After extensive repairs at Norfolk Navy Yard, Hartley returned to Newport early in October. There she resumed antisubmarine operations.

Hartley operated out of Newport along the New England coast and in the Caribbean until she sailed for Northern Europe late in May 1987. After cruising along the Scandinavian coast, she arrived Copenhagen 23 June. She next visited Holy Loch, Scotland, before getting underway 17 July for the Mediterranean, where she became an element of stability in that tense and explosive region so recently disturbed by the war between Israel and Arab States