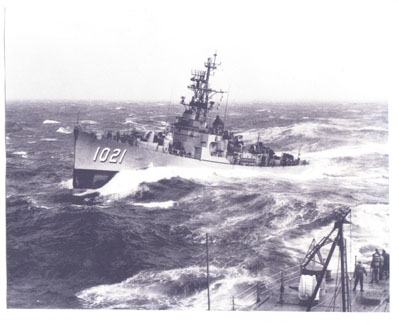 Named for: Henry A. Courtney

Joining Escort Squadron 10 at Newport R.I. 26 April 1957 Courtney operated from that port exercising in antisubmarine warfare and convoy escort techniques in the British West Indies until 3 September. She arrived at Milford Haven Wales 14 September for maneuvers with ships of other NATO navies in the Irish Sea visiting Plymouth England and Brest France before returning to Newport 21 October 1957 to resume local operations. She took part in hunter-killer exercises off North Carolina and in convoy exercises extending into the waters off Florida.

Courtney sailed from Newport 1 April 1958 and called at Reykjavik Iceland on the way to Bodo Norway to conduct exercises with ships of the Norwegian Navy. She put in to Antwerp Belgium and Argentia Newfoundland and returned to Newport 14 May. From 7 August to 30 September she cruised in the Atlantic with her squadron on convoy escort and screening duties visiting Rio de Janeiro Brazil from 15 to 19 September. Again cruising to South American waters from February through March 1959 she called at ports in Colombia Ecuador Peru and Chile and exercised with ships of the Colombian and Peruvian navies. NATO exercises in August and September 1959 found her calling in Newfoundland Northern Ireland England and Portugal. Through the first half of 1960 she cruised along the east coast on a variety of exercises including an amphibious operation with Marines on the coast of North Carolina.

From August through December Courtney participated in Operation "Unitas " the combined antisubmarine training cruise of the American nations.