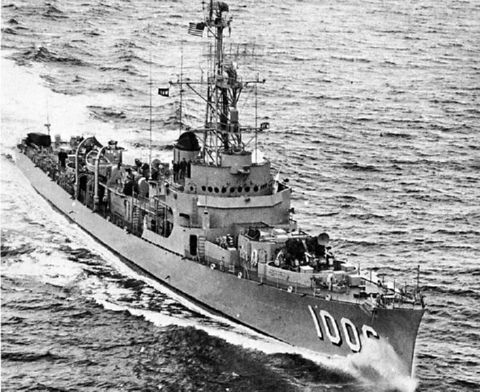 Homeported at Newport Dealey sailed on local exercises cruised to Key West Fla. to serve with the Fleet Sonar School and joined in convoy exercises in the Caribbean during her first 2˝ years of service.

On 4 January 1957 she sailed from Newport for a South American cruise returning 21 March for exercises off the Atlantic coast. NATO exercises in the Irish Sea in September and October took her to Plymouth England and Brest and Cherbourg France.

On 12 May 1958 Dealey sailed for the Mediterranean as flagship of Commander Escort Squadron 10 screening Wasp (CV-18) to her duty with the 6th Fleet. She patrolled the eastern Mediterranean during the Lebanon crisis and returned to Newport 7 October.

On 3 February 1959 she put to sea for Guantanamo Bay and after exercises there sailed through the Panama Canal for calls at Buenaventura Colombia; Salinas Ecuador; Talara and Callao Peru; and Valparaiso and Antofagasta Chile. During this cruise she exercised with the navies of all four countries. She returned to Newport 20 April and sailed on NATO exercises calling at Londonderry Northern Ireland; Greenwich England; and Lisbon Portugal before returning to Newport 11 October. She operated in the Narragansett Bay area for the remainder of 1959.

continued these operations plus a cruise to the Caribbean and an amphibious exercise off the Virginia and North Carolina coasts until 20 June 1960 when she began a short overhaul at the New York Naval Shipyard. Returning to Newport on 22 July the escort prepared for distant duty. On 22 August she sailed for exercises in the Caribbean and continued on a voyage around South America. After visits to Trinidad Venezuela and Colombia Dealey sailed through the Panama Canal down the coast of South America calling in Ecuador Peru and Chile transited the Straits of Magellan and turned northward visiting Argentina Uruguay Brazil and Trinidad. On 13 December Dealey arrived home in Newport where she passed the remainder of the year.