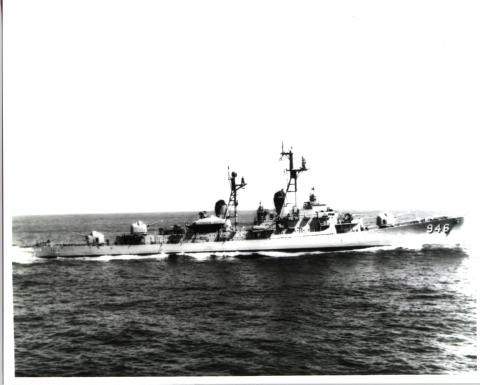 The USS EDSON (DD-946), the thirteenth "Big Gun" Forrest Sherman class destroyer, was commissioned on 7 NOV 1958. Built at Bath Iron Works shipyard in Bath, Maine, USS EDSON conducted her shakedown training in the Caribbean, transited the Panama Canal and called on Lima, Peru before reaching her homeport of Long Beach, California. USS EDSON began a series of Western Pacific deployments, five of which took her in to the Vietnamese war zone. In 1967 EDSON was hit by North Vietnamese shore artillery. After the war USS EDSON continued the West Coast "DD" routine of "West Pacs" alternating with state side maintenance and training. USS EDSON served her country for 30 years, 1 month and 8 days, until decommissioned on 15 DEC 1988. After decommissioning USS EDSON was donated to the INTREPID Sea-Air-Space Museum at New York City and was berthed there until 2004. The hulk of the EDSON is laid up at NISMF - Philadelphia, PA.

Final Disposition: Currently awaiting approval by the US Navy to be reinstated as a museum ship in Bay City Michigan

Edson called at Cuidad Trujillo and other Caribbean ports while conducting shakedown training en route to Callao Peru where she lay from 18 to 21 February 1959 delivering supplies for the U.S. Embassy in Lima. She reached Long Beach her home port 2 March and through the remainder of the year perfected her readiness with exercises along the west coast. On 5 January 1960 she sailed from Long Beach for her first deployment in the Far East during which she patrolled in the Taiwan Straits and took part in amphibious operations off Okinawa and exercises of various types off Japan. On 29 April she rescued three aviators from Ranger (CVA-61) who had splashed during exercises off Okinawa. Edson returned to Long Beach 31 May for an overhaul which continued through October. Edson spent the remainder of 1960 conducting training off San Diego.


Add Your Name to the
DD-946 Crew Roster