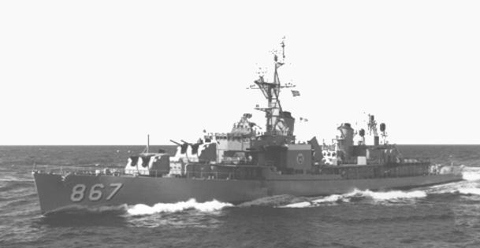 Stribling shook down out of Guantanamo Bay Cuba; then reported for duty at the Fleet Sonar School at Key West Fla. In 1948 she embarked upon the first of a career-long series of deployments to the Mediterranean Sea. Between 1948 and 1953 Stribling spent a portion of each year in the "middle sea." During the 1948 cruise she flew the United Nations flag while on Palestine Patrol. In 1949 she became the first American ship to visit a Spanish port since the outbreak of the Spanish Civil War in 1936. While deployed with the 6th Fleet again in 1950 she visited a number of northern European ports.

On 23 August 1953 Stribling set sail from Norfolk for the Panama Canal and duty with the Pacific Fleet. She reached Yokosuka on 3 October and after a brief upkeep period commenced Korean War operations. The destroyer operated intermittently with the carriers of Task Force (TF) 77 in the Sea of Japan and with TF 95 the United Nations Escort and Blockading Force along the west coast of Korea and in the Yellow Sea. When not patrolling with TF 95 or TF 77 Stribling trained and visited Far Eastern ports for liberty. In March 1954 she continued her voyage around the world. On the 19th she put into Port Said Egypt and then sailed through the Mediterranean visiting the sunny liberty ports along the way. On 10 April she completed her circumnavigation of the globe at Norfolk.

Over the next six years Stribling resumed her schedule of 6th Fleet deployments alternated with tours of duty with the 2d Fleet in the western Atlantic and Caribbean Sea. Constant training and exercises both American and NATO characterized the bulk of her activities during that period. She was in the Mediterranean in 1958 during the Lebanon crisis and stood by to lend a hand until it was resolved.

The period from June 1960 to April 1966 brought significant changes to Stribling. From June 1960 until April 1966 she was modified extensively at the Charleston Naval Shipyard under the Fleet Rehabilitation and Modernization (FRAM) program. After refresher training out of Guantanamo Bay and participation in NATO exercise "Lime Jug " Stribling stood watch during the recovery of astronaut John Glenn in February of 1962. In August she deployed to the 6th Fleet but spent at least a third of that tour in the vicinity of the Persian Gulf operating with the Middle East Force. She exercised with units of the Saudi Arabian and Iranian navies and visited many new ports notably Djibouti in French Somaliland Kharg Island in Iran and Aden. Stribling's next two deployments were also with the Middle East Force. In the spring of 1966 the destroyer received a Drone Antisubmarine Helicopter (DASH) system and by 4 May 1966 completed DASH qualification.

Stribling continued alternating between 6th and 2d Fleet assignments until 1969. In February and March of 1967 she participated in Polaris missile firing tests on the Atlantic test range. On 30 January 1969 Stribling put to sea from Mayport Fla. to make her second voyage to the Far East. Heading via the Panama Canal San Diego and Pearl Harbor the destroyer made for Yokosuka Japan and then operations off the coast of Vietnam. Stribling's duties included bombardments on the gunline search and rescue missions usually for downed carrier pilots and Positive Identification Radar Advisory Zone (PIRAZ) duty. The latter assignment involved riding "shotgun" for larger PIRAZ ships armed with more sophisticated radar and target designation systems.

That summer Stribling plane-guarded for the carriers operating on Yankee Station in the Gulf of Tonkin. When not operating in the combat zone she put into Kaohsiung Taiwan Hong Kong; and Subic Bay in the Philippines for liberty upkeep and provisions. On 2 August 1969 Stribling cleared the combat zone to return home. On her way she stopped at Kure and Yokosuka Japan; Pearl Harbor San Diego; and Panama. On 17 September 1969 she reentered Mayport.

Upon her return from Vietnam Stribling resumed her routine of Mediterranean deployments and Atlantic seaboard duty. She made two deployments to the 6th Fleet one from August 1970 to March 1971 and the other from February until September 1972. The first was an active tour of duty encompassing as it did the Jordanian crisis of 1970. With Syrian elements and left-wing Jordanians attempting to topple King Hussein from his throne the 6th Fleet was mobilized to maintain a striking force poised in the eastern Mediterranean. Operating in much the same manner as she did in Vietnam in 1969 she cruised along the coast of Syria on Bravo Station in the antiaircraft screen for the 6th Fleet until the crisis abated. On 22 October Stribling pursued an unidentified nuclear submarine stalking her quarry for almost 48 hours.

Stribling's second deployment since returning from Vietnam was far more routine. It was given over to normal operations and exercises with other units of the fleet and with units of foreign navies. In March of 1973 she sailed around the Cape of Good Hope and up through the Indian Ocean to rejoin the Middle East Force. Since her return to the United States from that last deployment Stribling has operated with the 2d Fleet in the western Atlantic. She has left the area only once in that time during September and October 1974 to participate in exercise "Northern Merger." That cruise took her to the Netherlands and England for port visits. In mid-October 1974 she resumed her eastern seaboard operations and as of March 1975 was still so employed.


Add Your Name to the
DD-867 Crew Roster