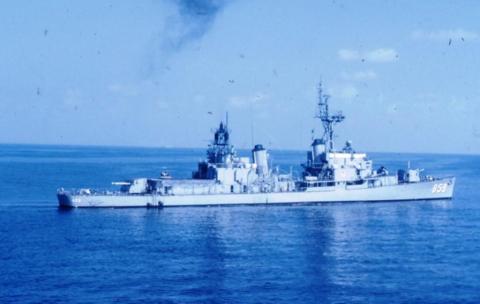 After shakedown off California Norris served three months with the Pre Commissioning Training Center Treasure Island then sailed for duty off Hawaii and Far eastern patrol operations for which she arrived Hong Kong 7 February 1946. Much of this deployment was spent preventing smuggling and privateering along the Chinese and Korean coasts. She returned San Diego 22 February 1947 but was on the China coast again from 8 January to 16 July 1948.

After an overhaul at Mare Island Naval Shipyard which included extensive alterations enhancing her antisubmarine capability Norris joined the Atlantic Fleet at Newport R.I. in October. Reclassified escort destroyer (DDE-859) 4 March 1950 she trained for her first Mediterranean deployment for which she sailed 5 July just after the outbreak of the Korean Conflict. She was accordingly ordered on through the Suez Canal to join the 7th Fleet in the combat area.

Joining in blockade patrol fire support and screening duties Norris gave gunfire support during the Hungnam evacuation in early December 1950 and while on blockade rescued 21 South Koreans from a drifting junk off North Korea. Returning to Newport early in March 1951 Norris overhauled at Boston and trained in the North Atlantic and Caribbean until sailing 19 April 1952 for her deferred first Mediterranean deployment. Duty with the 6th Fleet mighty protector of peace in the critical areas surrounding the Mediterranean continued until 27 June when she returned to Newport to prepare for Operation "Main Brace" a major NATO exercise in the North Sea 26 August-12 October. Mediterranean cruises April 1952-February 1953 and January 195 - May 1954 followed and from 28 June she operated primarily with the Hunter-Killer Force of the Atlantic Fleet for the next 15 months. During a fleet exercise 1 November she collided with Bergall (SS-320) when the submarine was attempting to fire torpedoes at the surface attack force.

From 2 May to 4 June 1955 she escorted replacements for the 6th Fleet to Gibraltar then returned to antisubmarine evaluation and training in the western Atlantic and Caribbean broken by a three-week patrol in the North Atlantic during the November 1956 Suez crisis. With Destroyer Squadron 24 she made an extended training cruise to South America from early January to late March 1957 visiting ports in Brazil Argentina and Uruguay between antisubmarine exercises with various Latin American navies.

Returning to the Mediterranean from August to December 1957 she also served in the Red Sea during this deployment then served in TF Bravo an experimental antisubmarine development group until her next 6th Fleet duty June-August 1960.

After a FRAM II conversion at Philadelphia from March to December 1961 Norris had over a year of intensive Atlantic Fleet training operations including a midshipman training cruise. She was Reclassified a general purpose destroyer (DD-859) 7 August 1962 and in October took station off Cuba during the Quarantine provoked by the missile crisis. With the return of quiet she was back in Newport in December to prepare for another Mediterranean deployment 6 February-7 July 1963. In August an experimental wire-guided torpedo system was installed by Boston Naval Shipyard and Norris spent much of the next year testing and evaluating the new system.

Deployed again to the Mediterranean 1 October 1964 - 18 January 1965 and 19 August-7 December 1965 Norris served in Polaris support operations as a missile tracking ship 1 to 15 April 1966 and in the primary recovery force for Gemini X 12 to 23 July. Intensified operations in Vietnam called her with other ships of Destroyer Squadron 20 and they left Newport 4 October for Panama and Yokosuka arriving 10 November. As they had in Korea her guns supported troops ashore first driving back Viet Cong attempting to overrun Vung Tau 21 November. After four months on the gunline giving major service in the struggle to keep South Vietnam free Norris completed a circumnavigation by returning via Suez to Newport 25 April 1967. Following east coast and Caribbean operations Norris returned to the Mediterranean 29 April 1968 for duty through the summer months. Returning to Newport in the fall she deployed again from 9 May - December 1969. Into 1970 she continues on rotation between the 2nd and 6th Fleets.


Add Your Name to the
DD-859 Crew Roster