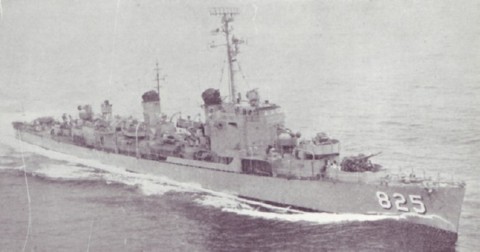 Carpenter was reclassified DDK on 28 January 1948 and completed as a hunter-killer destroyer at the Newport News Shipbuilding Corp. in 1949. Following her commissioning and shakedown she was reclassified DDE on 4 March 1960 and assigned to the Pacific Fleet.

Carpenter cleared Norfolk 26 June 1950 for her home port Pearl Harbor arriving 13 July. Local operations were conducted until 4 February 1952 when she sailed for duty in the Korean War. During her tour with TF 77 she patrolled the Taiwan Strait twice entered the dangerous waters of Wonsan Harbor to rescue downed aviators and took part in hunter-killer exercises. Reporting to TG 95.1 in the Yellow Sea 28 May Carpenter's guns pounded the Choda Islands off the west coast of Korea on 1 and 2 June. The destroyer returned to Pearl Harbor 29 June for a summer of operations in Hawaiian waters.

After fleet exercises at Eniwetok and Kwajalein in the fall of 1952 Carpenter prepared for her second tour of duty with TF 77 off the east coast of Korea. She sailed for the western Pacific May 1953 and took part in the smashing bombardment of Hungnam on 12 and 13 June. Once more she returned to patrol vigilantly in the Taiwan Strait and took part in hunter-killer exercises before returning to Pearl Harbor 19 December 1953.

From the close of the Korean War through 1960 Carpenter alternated periods of training exercises and regular overhauls at Pearl Harbor with annual deployments in the Far East. These tours in the Western Pacific included operations in the Philippines. assignments on patrol in the Taiwan Strait exercises off Japan and Okinawa and visits to ports in Japan as well as Honk Kong. On both her 1957 and 1958 tours she sailed outward hound by way of Samoa; Sydney Australia; Manus; and Guam thus varying the usual passage via Midway to Japan.


Add Your Name to the
DD-825 Crew Roster