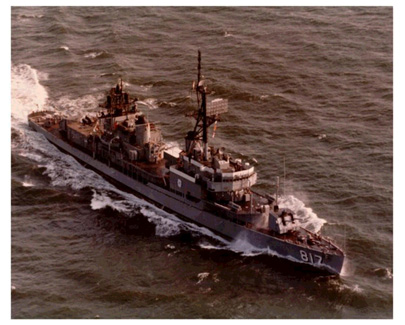 Corry sailed from Galveston Tex. 28 March 1946 for shakedown training in the Caribbean and arrived at Norfolk 10 July. Following a tour of duty in European and Mediterranean waters from 23 July 1946 to 19 March 1947 Corry conducted Reserve training cruises from the Potomac River Naval Command then reported to Pensacola to serve as plane guard for carriers operating off Florida from 22 September 1947 to 28 April 1950.

Corry joined Destroyer Squadron 8 at Norfolk 22 May 1950 for antisubmarine exercises which included a cruise to Quebec in July. From 2 September to 12 November she served with the 6th Fleet in the Mediterranean and joined a midshipman cruise to northern Europe visiting Gotesburg and Cherbourg France from 1 June to 27 July 1951. Her next tour of duty with the 6th Fleet was from 22 April to 23 October 1952. Corry sailed out of Norfolk for local operations until 1 April 1953 when she was decommissioned for conversion to a radar picket destroyer. She was reclassified DDR-817 9 April 1953.

Recommissioned 9 January 1954 Corry carried NROTC midshipmen on a cruise to New Orleans and through the Panama Canal for operations at Balboa in the summer of 1954. From September 1954 through 1960 Corry alternated four tours of duty with the 6th Fleet in the Mediterranean with operations out of Norfolk along the east coast and exercises in the Caribbean.


Add Your Name to the
DD-817 Crew Roster