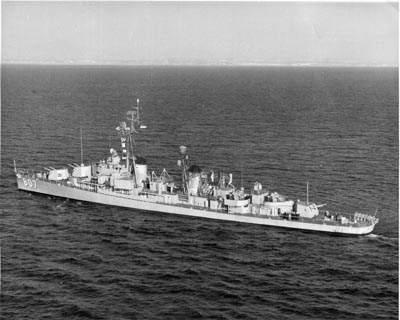 On 26 July 1945 Benner joined the 3rd Fleet off Japan and screened carriers during the last strikes against the Japanese home islands. Following the surrender of Japan the destroyer remained in the Far East on occupation duty until 3 January 1946. For the next three years she rotated between the west coast and Far East making two Far Eastern cruises (30 January-23 September 1947 and 1 October-23 December 1948). She was reclassified DDR-807 18 March 1949.

Reassigned to the Atlantic Fleet 1 May 1949 Benner shifted her base to Newport R. I. She operated on normal peacetime duty including four Mediterranean tours until departing for the Pacific 9 June 1956. She arrived at Long Beach Calif. 28 June 1956 and remained on the west coast during the rest of the year.

Benner received one battle star for her service in World War II.


Add Your Name to the
DD-807 Crew Roster