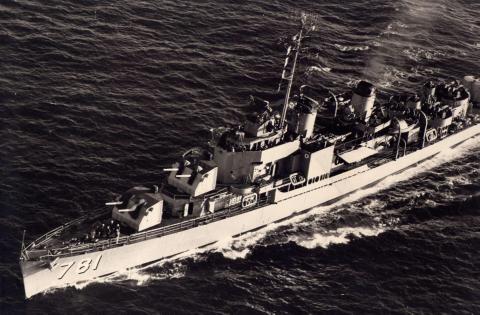 Robert K. Huntington joined the Pacific Fleet 31 May 1945 and from 27 June to 16 August escorted ships between Eniwetok and Ulithi. On 28 August she joined the Fast Carrier Task Force off the Japanese coast and was one of the ships which escorted battleship Missouri into Tokyo Bay to receive the official Japanese surrender. She then returned to San Diego carrying 100 marines home. In the spring of 1946 she returned to the Marshalls as a unit of JTF 1 during Operation "Crossroads " the first atomic bomb test at Bikini. In July she witnessed the air burst from a considerable distance and the more spectacular underwater blast from the comparatively close range of 10 miles.

Until early in 1949 Huntington operated and trained off the west coast in Hawaiian waters and in Far Eastern waters with Task Force 38 the pacific Mobile Striking Force. In April the destroyer was transferred to the Atlantic Fleet where she was assigned to a carrier task force then undergoing extensive antisubmarine warfare training. She spent the following winter in Arctic waters; then in February 1950 headed for the Caribbean to participate in fleet exercises In December Huntington deployed for the first time to the Mediterranean and duty with the 6th Fleet. In the spring she returned to Norfolk and for the next 2 years she alternated cold weather operations with Caribbean cruises then from the spring of 1953 until the summer of 1955 rotated between duty in the Mediterranean and exercises with the 2d Fleet off the U.S. east coast and in the Caribbean. In July of 1955 she was in the North Atlantic guarding President Eisenhower's plane route as he traveled to and from the Geneva Conference.

Following a Caribbean cruise in the spring of 1956 Huntington conducted a midshipman training cruise to Europe and the Caribbean. In 1957 she operated in the Caribbean and then in European waters for NATO exercises. In both 1958 and 1959 Huntington made 6-month Mediterranean deployments while she spent most of 1960 undergoing a fleet rehabilitation and modernization overhaul and conversion. Emerging from the shipyard the "new" destroyer steamed to her new home port Mayport and through 1961 operated off the U.S. east coast and in the Caribbean.

In early 1968 Huntington continued to operate off the east coast and in the Caribbean until transferring to the Pacific Fleet. In October she deployed to the Far East for 6 months operating off Vietnam. She returned to Mayport 17 April 1969 and operated in the Atlantic Caribbean and Gulf of Mexico into 1970.

In July 1970 Robert K. Huntington received a new assignment and a new home port. Operating out of Bayonne N.J. she was active in the Atlantic and Caribbean with the Reserve program until October 1973. At that time as a result of a survey she was found to be unfit for further service and was decommissioned 31 October at Newport R.I. Huntington was stricken from the Navy List on the same day and sold to the Venezuelan Navy.


Add Your Name to the
DD-781 Crew Roster