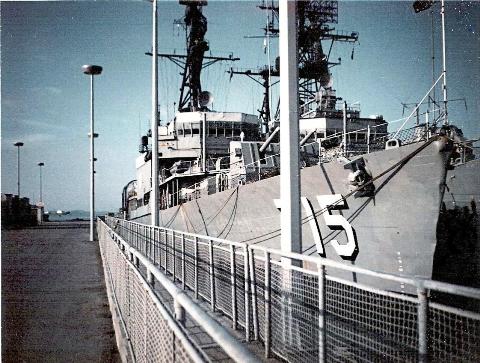 William M. Wood (DD-715) was laid down on 2 November 1944 at Newark N.J. by the Federal Shipbuilding & Drydock Co. launched on 29 July 1945; sponsored by Mrs. Joseph P. Tracy and commissioned at the New York Naval Shipyard on 24 November 1945 Comdr. George R. Wilson in command.

Following shakedown out of Guantanamo Bay Cuba and type training in the Norfolk area William M. Wood operated in the Caribbean Sea from April to June 1946. In June she was reassigned to the Pacific Fleet. She arrived in San Diego during the first week in July but departed there a week later bound for Hawaii. The destroyer operated out of Pearl Harbor from mid-July to late September when she received orders to duty along the coast of China. The warship arrived in Tsingtao China near the middle of October and began patrolling the Yellow Sea between northern China and Korea in an effort to stem postwar smuggling. That task lasted until February 1947 when she headed back to the United States arriving in San Diego early in March.

During the following six months William M. Wood conducted type training along the Pacific coast and underwent a three-month overhaul. In October 1947 the destroyer joined Destroyer Division (DesDiv) 131 in screening Valley Forge (CV-45) on an extended voyage to the western Pacific. In the ensuing seven months the ships called at Sydney Australia; Hong Kong; Shanghai and Tsingtao in China and Yokosuka Japan. She returned to San Diego with the unit in May 1948 and resumed normal training and upkeep operations which were broken once by a two-month overhaul at the Mare Island Naval Shipyard.

On 1 April 1949 a new fleet organization was promulgated reassigning William M. Wood to the Atlantic Fleet. The destroyer however remained on the west coast until 5 October when she finally sailed for her new home port Newport R.I. She reported for duty with the Destroyer Force Atlantic Fleet (DesLant) on 21 October. The warship served DesLant as a school ship training junior officers in gunnery and engineering. In May 1950 the warship participated in a Navy Marine Corps amphibious exercise conducted on the North Carolina coast. During the following month she conducted underway training out of Newport. July brought a brief tour of duty in Caribbean waters with a hunter/killer group and a quick visit to Iceland.

The destroyer returned to Newport in August but put to sea the next month for the first of many deployments with the sixth Fleet in the Mediterranean Sea. After two months of duty however William M. Wood left the 6th Fleet to resume operations out of United States ports. Following a brief leave and upkeep period at Newport the destroyer moved south to Pensacola Fla. where she served for a time as plane guard for Monterey (CVL-26) during carrier qualifications.

At the conclusion of that assignment she returned to normal duty out of Newport. In January 1952 she embarked upon her second Mediterranean cruise. That tour of duty lasted seven months during which time she participated in several NATO multinational exercises. That tour of duty also included visits to ports in the United Kingdom Belgium and Germany. She returned to Newport in July and after a voyage to Halifax in company with Midway (CVB-41) late in September entered the Boston Naval Shipyard to begin conversion to a radar picket destroyer. She was placed out of commission on 2 October 1952 and redesignated DDR-715.

William M. Wood completed her conversion to a radar picket destroyer during the summer of 1953 and was recommissioned on 6 June 1953 Comdr. J. S. Slaughter in command. Following a shakedown cruise to Guantanamo Bay Cuba that fall she began her third tour of duty with the 6th Fleet in November. At the end of several weeks of operations with the 6th Fleet the radar picket destroyer returned to Norfolk early in February 1954.

The following month she journeyed south to Pensacola Fla. where she once again planeguarded for Monterey during carrier qualifications. The summer of 1954 brought the ship a two-month midshipman cruise to European waters where she made port calls at Cadiz Spain and Rotterdam in the Netherlands. She returned to Norfolk in August and spent the remainder of 1954 engaged in training operations. In January of 1955 she embarked upon her fourth deployment to the Mediterranean. Again NATO exercises and port visits at various points along the Mediterranean littoral kept the ship busy. She was in port at Volos Greece between 19 and 21 April during which time the city suffered a series of severe earthquakes. She remained there after the disaster and rendered all possible aid to the victims.

Returning to the United States that summer she entered the Philadelphia Naval Shipyard for a major overhaul. That fall the warship conducted refresher training and then returned to Norfolk to prepare for her upcoming Mediterranean deployment. That tour of duty began in February 1956 and ended the following June. Between June and October she operated out of Norfolk along the coasts of the Carolinas Georgia and Florida conducting air defense exercises. Mounting tensions in the Middle East precipitated an Israeli invasion of the Egyptian Sinai on 29 October and William M. Wood hastened to the eastern Mediterranean in November to join Task Force (TF) 26 in helping to restore peace and order in that chronically troubled sector of the world. The crisis cooled quickly enabling the warship to return home in time to celebrate the Christmas holidays.

The warship began 1957 with Operation "Springboard " conducted in the West Indies in January and February. In March she escorted Canberra (CA-70) when that cruiser carried President Eisenhower to Bermuda to confer with British Prime Minister Harold Macmillan. William M. Wood provided transportation for the members of the press who covered the President's visit. In June she entered the Norfolk Naval Shipyard for a three-month overhaul.

Following that she conducted refresher training out of Guantanamo Bay Cuba for six weeks. In November the destroyer resumed normal duty out of Norfolk with the Atlantic Fleet. She began 1958 the same way she began 1957 with "Springboard" exercises in the Caribbean during January and February. Then in June at the conclusion of three months of normal Atlantic Fleet duty the warship embarked upon a Mediterranean cruise.

Not long after her arrival in the Mediterranean fighting erupted in Lebanon. The intensification of the strife prompted the pro-western Lebanese President Chamoun to seek military help from the United States. President Eisenhower responded immediately by sending Marine Corps units ashore in the troubled country and stationing 6th Fleet ships offshore to support them. During the period 14 July and 3 September William M. Wood spent 40 days on station patrolling off the Lebanese coast. Following brief visits to Izmir Turkey; Naples Italy; and Gibraltar she headed back to Norfolk and arrived there on 30 September. Normal Atlantic Fleet operations including exercises along the coast and in the Caribbean ensued.

Over the next decade William M. Wood continued to alternate 6th Fleet deployments with duty along the Atlantic coast and in the Caribbean area. In August 1962 she returned to the United States from her 10th Mediterranean assignment and resumed operations out of Norfolk.

That employment however was interrupted in October when President John F. Kennedy declared the "quarantine" of Cuba in response to the siting of offensive nuclear missiles on the island. For 57 days William M. Wood participated in the quasi-blockade patrols conducted around Cuba to prevent the importation of further missiles and to ensure the removal of those already there.

At the successful conclusion of that mission the warship resumed normal east coast operations. In February 1963 members of Venezuela's communist insurgent group the FALN hijacked the Venezuelan freighter SS Anzoategui and William M. Wood joined ships from several navies in an international search for the merchant ship. Their efforts proved to be in vain for the terrorists eluded capture entered the Brazilian port of Belem and received political asylum.

Following her return from her 11th Mediterranean deployment in the spring of 1964 William M. Wood entered the Philadelphia Naval Shipyard on 18 May 1964 to begin a Fleet Rehabilitation and Modernization (FRAM) overhaul. During that period she was converted from a radar picket destroyer back to an all purpose destroyer. She was redesignated DD-715 on 1 July 1964 and completed her FRAM conversion on 11 March 1965 when she headed back to Norfolk to rejoin the Atlantic Fleet.

In the midst of her post-overhaul refresher training a revolution broke out in the Dominican Republic on 21 April. On the 29th the destroyer received orders interrupting her refresher training and she hastened to the scene of the conflict to protect foreign nationals caught in the middle and to support an American and later multinational expeditionary force dispatched to the island by the Organization of American States. The situation was soon stabilized and William M. Wood began a coastal patrol and surveillance assignment. While so engaged she picked up 13 foreigners including some American citizens who requested evacuation. These people were transferred to Pawcatuck (AO-108) on 7 May; and the following day O'Hare (DD-889) relieved her on station off the Dominican Republic. William M. Wood then resumed refresher training and completed it on 20 May.

On 18 June after post-refresher availability at Norfolk the destroyer embarked upon another tour of duty in the Mediterranean with the 6th Fleet and continued alternating such deployments with normal duty out of Norfolk with the Atlantic Fleet. During 1968 she operated with the antisubmarine warfare (ASW) forces attached to the Atlantic Fleet. In May and June of 1968 she participated in the unsuccessful search for the nuclear attack submarine Scorpion (SSN-589) reported missing on 27 May. She closed the year in overhaul at Norfolk.

During her last eight years of active service William M. Wood made two more routine Mediterranean cruises and then served there on a three-year extended deployment. During the first of her last two normal Mediterranean deployments which lasted from 12 November 1969 to 22 May 1970 she shadowed two new Soviet ships Moskva and Leningrad to gather intelligence on the new hermaphrodite cruisers/ASW carriers. The second of the two cruises lasted from 8 February to 23 July 1971 and consisted of more routine 6th Fleet operations mostly training exercises both multinational and unilateral.

Following almost 13 months of 2d Fleet operations during late 1971 and early 1972 the warship embarked upon an extended assignment to the 6th Fleet on 18 August. Her home port was officially changed to Athens Greece from which port she operated for almost three years. The warship spent most of her time during that period engaged in training operations with other units of the 6th Fleet and with elements of Allied navies. She also made several forays into the Black Sea for special operations there. In July and August of 1974 she conducted continuous patrols in the vicinity of Crete during the Turkish invasion of Cyprus.

Her extended deployment with the 6th Fleet ended in June of 1975 when she began a long voyage home. The destroyer visited ports in France Germany Denmark England and Bermuda before arriving back in Norfolk on 23 July. After six months of normal operations out of Norfolk William M. Wood deployed to the Mediterranean one final time in January of 1976. She returned to the United States that summer and resumed 2d Fleet operations. On 1 December 1976 she was placed out of commission at Norfolk and her name was struck from the Navy list that same day. She was stripped at Norfolk and sold for scrap sometime in 1977.


Add Your Name to the
DD-715 Crew Roster