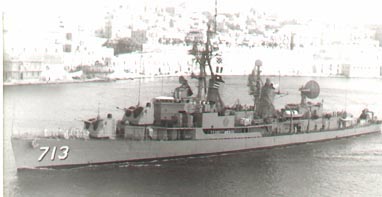 Final Disposition: Sold to Iran 13 January 1975 to be broken up for spare parts

After shakedown in the Caribbean Kenneth D. Bailey operated in the Atlantic from the New England coast to the Caribbean. Working out of Newport R.I. and Norfolk Va.. she served as plane guard during the qualification of pilots in carrier operations and trained men for the crews of new destroyers. From 13 February to 26 March 1947 she cruised along the eastern coast of South America and returned to Norfolk 31 March.

On 10 November Kenneth D. Bailey departed Norfolk on the first of many Mediterranean cruises during the Cold War. While deployed with the mighty 6th Fleet she has strengthened American naval power during its constant vigil to maintain peace preserve freedom contain Communist expansion and keep the Middle East facing west. From 13 December to 5 January 1948 she patrolled the coast of Greece to insure Greek independence despite Communist aggression. While operating in the Mediterranean from 13 January to 12 May 1949 she supported the still unsettled truce in Israel and helped to maintain peace between Italy and Yugoslavia during their struggle for Trieste. Again from 3 September 1951 to 4 February 1952 she ranged the Mediterranean from Spain to Turkey to maintain the freedom of the nations which rim that ancient sea.

When not deployed with the 6th Fleet Kenneth D. Bailey joined operations that carried her from the Caribbean and the reaches of the Arctic Ocean to the shores of Northern and Western Europe. Undertaking a variety of duties she trained naval reservists served as plane guard and screen during carrier operations and participated in cold weather exercises north of the Arctic Circle. On 2 December 1952 she entered the Boston Naval Shipyard for modernization and conversion to a radar picket destroyer and decommissioned on the 22d.

Redesignated DDR-713 Kenneth D. Bailey recommissioned 29 August 1953 Comdr W. D. Gaddis in command. Based at Newport she operated along the East Coast then deployed with the 6th Fleet 19 May 1954. Before returning to Newport 28 September she participated in joint NATO operations in the Eastern Mediterranean. She again deployed to the Mediterranean from 5 November 1955 to 17 March 1956 and in February 1956 she patrolled the Red Sea along Israeli and Egyptian coasts to express U.S. concern over the mounting Suez crisis. In April 1957 she cruised the eastern Mediterranean in support of King Hussein's pro-Western Jordanian government then threatened by Communist subversion. And while on her next deployment (2 September 1958-28 March 1959) she supported U.S. operations in Lebanon begun in July 1958 at the request of Lebanese President Chamoun who feared a Communist coup.

Kenneth D. Bailey shifted her homeport from Newport to Mayport Fla. 16 June 1959. After completing destroyer operations in the Atlantic she entered Charleston Navy Yard 26 January 1960 for a 9-month FRAM II overhaul that equipped her with new radar sonar and communication facilities. She returned to Mayport 27 October well prepared to help maintain American security on the seas. She sailed 14 November for waters off Guatemala and Nicaragua to establish barrier patrols to prevent the landing of Cuban supplies and armed forces during small-scale revolts in those Central American nations. She continued this important duty until 4 December then returned to Mayport 18 December to prepare for further service in the Mediterranean.

Departing Mayport 9 February 1961 Kenneth D. Bailey arrived Gibraltar 18 February to commence 6 months of Fleet and NATO operations that carried her from the coast of France to the shores of Greece Turkey and Lebanon. Since that time she has deployed to the Mediterranean four times within 4 years to support the fleets's peace-keeping mission. Returning from her latest deployment 26 October 1966 this versatile destroyer remained off Mayport Fla. until 12 April 1967 when she arrived at Charleston S.C. for overhaul where she remains into the fall of 1967.


Add Your Name to the
DD-713 Crew Roster