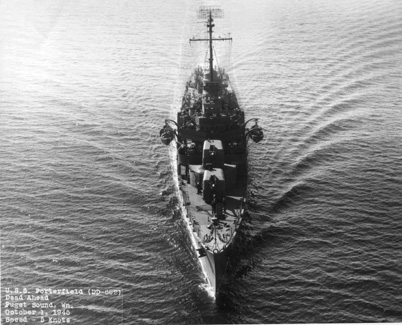 Porterfield (DD-682) was laid down by the Bethlehem Steel Co. San Pedro Calif. 12 December 1942; launched 13 June 1943; sponsored by Mrs. Louis B. Porterfield; and commissioned 30 October 1943 Comdr. J. C. Woefel in command. Following her shakedown Porterfield joined Task Force 53 getting underway 12 January 1944 and arriving off the Marshalls on the 31st. Porterfield's first job was shore bombardment on Ennomennet and Ennubirr Islands followed by harassing and neutralizing fire on Roi and Namur.

By 4 February the situation was well in hand and Porterfield left to convoy several cargo and transport ships to Funafuti. Here she joined three merchantmen and another destroyer Fletcher enroute to Majuro. On 20 February Porterfield got underway from Majuro in company with a division of battleships for shore bombardment in the Marshalls. The destroyers screened as the battleships guns worked over enemy installations thoroughly for two days.

After a quick voyage to Pearl Harbor Porterfield joined the replenishment group for the fast carrier task force screening the oilers which refueled the striking forces during the raids on Yap Palau and Satawan. This duty continued until the end of April when Porterfield again set course for Pearl Harbor.

Porterfield's next assignment was screening escort carriers during the Marianas invasion. The group sortied from Pearl Harbor 30 June with Porterfield's group of jeep carriers furnishing air coverage for the advance. The group arrived off Saipan 15 June and enemy air attacks began shortly thereafter. Porterfield stayed with the force rescuing two pilots before being sent to Eniwetok 1 July for dry-docking. After her repairs the ship reached Saipan again 11 July and operated with the carrier screen until sent to Guam early in August.

On 3 August Porterfield was detached from the carrier group to join the hard hitting carrier Task Force 58/38. She rendezvoused with Task Group 58.4 east of Guam 6 August and operated with that group during the rest of the Guam campaign returning to Eniwetok for upkeep 10 August.

The group put to sea again 29 August and launched raids against Palau and Mindanao in support of the landings in the Palaus. The ships remained in the general area between the Philippines and the Palaus during all of September striking at islands within the Philippines.

The carrier force left Ulithi 6 October with Okinawa and Formosa as their objectives. Air raids were heavier this time and Porterfield splashed three planes also rescuing the crew of a torpedo bomber from Hornet. Following the attacks on Okinawa and Formosa the group was sent to the Philippines lying in wait for units of the Japanese Fleet which were supposed to be planning an attack.

At dawn 25 October the carrier planes from the formation began their strikes against the Japanese forces crippling the entire group and sending it scurrying back toward Japan. Porterfield was ordered to join four cruisers to finish off the damaged ships. The group engaged one Japanese cruiser which sank just as the destroyers were pressing a torpedo attack.

The group sortied again 1 November for an operating area east of Samar. On the morning of the 5th the carriers launched a strike against Luzon amid gathering stormy weather. One pilot from Langley crashed and had to be hauled aboard Porterfield by a life boat. The Japanese struck back in the early afternoon and Lexington took a kamikaze crash. Again Porterfield was undamaged.

On 22 November she again sortied from Ulithi for more raids on Luzon returning to Ulithi for logistics and upkeep 3 December. A week later she was again underway for Luzon and recovered another Langley pilot on the 13th.

On the group's next raid it was decided to enter the South China Sea via the Bashi Channel between Formosa and Luzon. Once inside the group conducted a shipping raid along the China coast which cost the Japanese a heavy toll of their remaining shipping strength.

The group cleared the China Sea 19 January 1945 and again sent planes against Formosa. The Japanese defense was more effective this time however as two suicide planes crashed into Ticonderoga and one bomb hit Langley's flight deck. Further strikes were launched against Okinawa Gunto before the group returned to Ulithi 27 January.

On 10 February the ships sortied again bound for Tokyo and subsequent support of the Iwo Jima landings. On the second day out Porterfield rescued two pilots from the carrier Cowpens. The fast Carrier Task Force penetrated to within 60 miles of Tokyo without being attacked and then retired toward Iwo Jima to provide direct support for the landings there. The carrier planes flew direct support missions until 23 February when the group refueled and set course for Tokyo. During the Iwo Jima campaign Porterfield added another plane to her credit. The group prowled off the Japanese home islands for several days striking almost at will.

Early on the morning of 26 February Porterfield picked up a Japanese picket boat on her radar screen and promptly engaged her. The 150 foot boat put up a stiff fight aided by rough seas which made fire control difficult but Porterfield sank her within fifteen minutes.

The following day with the weather steadily improving the task group refueled and Porterfield departed for Ulithi arriving 1 March. She stayed in Ulithi for three weeks before leaving for Okinawa Jima where she was to lend fire support for the landings on Kerama Retto and Okinawa.

On 6 April just as the ships were forming for night retire meet suicide planes swarmed over the formation diving at any ship which presented a good target. Porterfield shot down one and was then sent to the aid of destroyers Leutze and Newcomb. The attack was still in full swing when Porterfield maneuvered close to the two burning ships putting over boats to rescue survivors. She then screened the damaged ships to Kerama Retto and transferred the wounded to a hospital ship

Later that day Porterfield was ordered out with Task Force 54 to intercept units of the Japanese fleet including the giant battleship Yamato which were steaming toward Okinawa The two forces never met however as planes of Task Force 58 destroyed the Japanese units. Porterfield then returned to Okinawa continuing on screening and bombardment duty during which she downed two Japanese planes 10 April.

On the 12th another heavy air attack materialized. Porterfield in the leading screen position in her formation met the attackers which included about 10 bombers and torpedo planes. With one of her five- inch guns out of commission she nevertheless threw up a tremendous amount of highly accurate fire downing four planes before they could get past her. Four more were brought down as they proceeded over Porterfield to the heavy units. Two managed to crash into ships one hitting a destroyer and another smashing into a battleship. Porterfield continued her fine fire support shooting down another enemy plane before being forced to return to the rear area because of damage to one engine. Upon arriving in Saipan however the ship was immediately ordered back to Okinawa a convoy escort.

Early in May however the ship was ordered back to Ulithi where she remained until 20 June when she got underway for Okinawa only to find that the engine previously damaged was still inoperative. On 4 July Porterfield was ordered back to the Puget Sound Navy Yard for an avail. ability. The ship arrived at the Puget Sound Navy Yard 24 July and was still undergoing repairs when the end of the war was announced. On 27 September she reported to the Pacific Fleet and 3 October got underway for San Diego for decommissioning.

Porterfield recommissioned 27 April 1951 and arrived Pearl Harbor 28 July steaming for Yokosuka 7 August. Her first Korean assignment was in support of United Nations policies as a part of Task Force 77 off the Korean East Coast where she performed screening and destroyer duties. On 12 December Porterfield joined Task Group 95.11 in the Yellow Sea off the Korean West Coast and until late December acted as a screening unit and plane guard as well as participating in numerous close support patrols.

Porterfield returned to San Diego 8 March 1952 commencing her second far eastern tour 4 October. With Task Force 77 off the Korean East Coast the ship's duties consisted mainly of screening and plane guarding for the fast carriers with occasional shore bombardments. This was followed by Taiwan patrol duty. She returned to San Diego 6 May 1953.

Porterfield continued to alternate periods of underway training and operations off the California coast with deployments to the western Pacific which took place in 1954 1955 1956 1957 and 1958. On the last of these deployments Porterfield participated in the Taiwan patrol for several weeks commencing with the intensification of military action from the Chinese mainland against the off-shore islands.

On her eighth western Pacific cruise in 1959 Porterfield operated extensively as a member of a Hunter Killer Antisubmarine Task Group. She deployed again from November 1960 to April 1961 and from November 1962 to June 1963. Further western Pacific deployments were made in 1964 and 1966 when she worked with amphibious groups off the coast of Vietnam. She remains with the Pacific Fleet into 1970.


Add Your Name to the
DD-682 Crew Roster