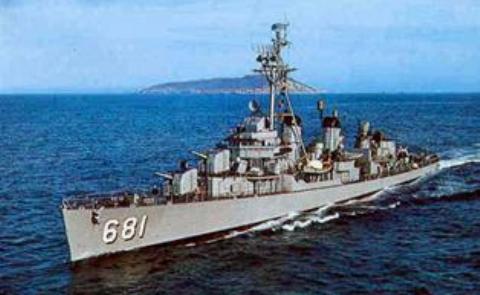 Hopewell conducted shakedown training in the San Diego area before sailing for Hawaii 13 January 1944. She got underway 23 January for the invasion of the Marshalls as American amphibious task forces picked up momentum in their drive toward Japan. Steaming as a forward picket ship Hopewell arrived off Kwajalein 31 January and delivered destructive gunfire support during the initial assault. That night she bombarded Roi and Namur Islands and 1 February moved to screening and patrol duties off the other islands of the group. With the success of the landings assured Hopewell sailed to Pearl Harbor arriving 24 February.

The destroyer arrived Purvis Bay Florida Islands 14 March to take part in the developing offensive on the northern coast of New Guinea. She carried out screening and patrol assignments and contributed shore bombardment during the Aitape landings part of the bold Hollandia operation. After Aitape an unopposed operation carried out 22 April Hopewell remained with 7th Fleet patrolling and screening. With three other destroyers she carried out a bombardment of Japanese positions on New Ireland 29 May and in June joined escort carrier Hoggatt Bay on antisubmarine patrol.

Hopewell's next important operation was the invasion of Morotai vitally necessary as an air base for the Philippines campaign to come. She arrived 16 September the day after the initial landing to assume screening duties and shot down an attacking Japanese plane that day. On the 18th she supported an auxiliary landing on Morotai and sailed 25 September with a convoy for Humboldt Bay.

The long-awaited invasion of the Philippines began with the Leyte landings 20 October and 4 days later Hopewell arrived with a reinforcement group. A damaged propeller kept her from taking part in the four-part Battle for Leyte Gulf in which the Japanese Fleet suffered fatal defeat 24-25 October. Next day she departed in the van of a convoy and shaped course for Humboldt Bay where repairs could be effected. At the eastern entrance to the Gulf the convoy was attacked. and in the battle that followed Hopewell made concealing smoke and shot down two aircraft.

The veteran ship sailed again 8 November for Leyte and after two trips from Humboldt Bay and return with convoys she joined the Mindoro invasion forces. After fighting off heavy air attacks en route Hopewell arrived off the assault area 15 December and provided fire support as troops stormed ashore. As air attacks continued the ship helped fight fires on LST-472 and assisted in shooting down other planes before sailing again for Leyte at noon.

With Mindoro in allied hands and air bases for the Luzon invasion under construction Hopewell prepared for that operation. to be carried out initially at Lingayen Gulf. She sailed 4 January and fought off desperate Japanese kamikaze attacks on the passage to Lingayen for the landings 9 January joined the screen of an escort carrier group providing air cover. Hopewell joined in the amphibious assault on Corregidor 14 February and while clearing obstructions from Mariveles Harbor with gunfire engaged a large battery on "the rock". The destroyer laid smoke and moved in to help damaged YMS-48 and soon received four hits putting her battery control station out of commission. Although suffering 17 casualties Hopewell remained in Manila Bay until 18 February when she sailed to Manus for repairs.

The ship next continued to San Francisco arriving 17 March and after further repairs sailed for Pearl Harbor 28 May 1945. Training operations in Hawaiian waters occupied her until 20 July when she sailed for Eniwetok and Guam. The day of the Japanese surrender Hopewell sailed from Guam with a refueling group supporting famed Task Force 38 which had done so much to bring victory. She operated in Japanese waters in support of the occupation until 21 October 1945 when she sailed for the United States via Pearl Harbor. Arriving Puget Sound Navy Yard 8 November she later moved to San Diego where she decommissioned 15 January 1947 and was placed in the Pacific Reserve Fleet.

Hopewell sailed for her second tour in Korea 11 August 1952 after shakedown and training exercises. During this period of stalemate in the land war the Navy continued to operate against supply lines and strong points and Hopewell screened the carriers and heavy ships of Task Force 77. Bombardment of Wonsan followed another period of Formosa Patrol and in December the ship steamed to Formosa to help train Nationalist Chinese sailors. She returned briefly to Korea to screen giant battleship Missouri during bombardment operations late in January 1953 and sailed for the United States 3 March 1953.

After operating off the California coast for several months on antisubmarine training Hopewell sailed again for the Far East 27 October 1953. She again took part in training exercises and patrol off Formosa returning to San Diego 23 May 1954. As she began her fourth cruise a new crisis between Communist China and Formosa developed and in February Hopewell assisted in the evacuation of the Tachen Islands. Following this important Cold War operation the destroyer took part in fleet exercises in the western Pacific returning to San Diego 22 May 1955. The veteran ship spent the remainder of 1955 on exercises off the coast. Disaster struck 11 November during an amphibious training operation when a single engine attack bomber crashed into Hopewell amidships killing five and starting gasoline fires. Alert fire fighters brought the flames under control and the ship returned to San Diego for lengthy repairs.

Returning to active operations again 24 March 1956 when she sailed for the Far East Hopewell resumed her regular pattern of cruises to Japan Formosa and Okinawa interspersed with training and readiness exercises off the West Coast of the United States. She operated with Korean and Nationalist Chinese ships on maneuvers in 1958 and 1959 and continued to act as an integral part of America's peace - keeping fleet in the Pacific. On 12 November 1959 Hopewell returned to San Diego for extensive refitting and training. As Communist activity to overthrow the legal government of South Vietnam grew Hopewell was repeatedly deployed from the West Coast to Vietnam from 1960 into 1967 in defense of the small republic. In February 1963 she rescued a crewman from a downed A-3B of Ticonderoga (CVA-14) in the South China Sea. During a 3- month cruise which ended in August Hopewell fired 2 276 rounds destroyed 112 structures and silenced a Viet Cong mortar attack upon ground forces For the remainder of 1966 she acted as school ship in gunnery and ASW off the West Coast.


Add Your Name to the
DD-681 Crew Roster