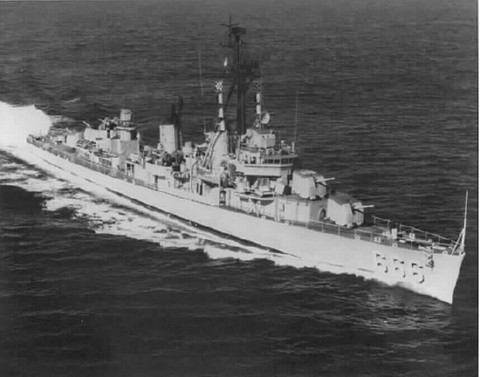 Black proceeded to Pearl Harbor via San Diego and reported for duty 15 November 1943. Shortly thereafter she steamed to Tarawa and was assigned screening duty off Tarawa Lagoon entrance. She continued this duty until 22 January 1944 with occasional diversion as escort for transports to the 180th meridian. On 15 January 1944 she rescued 22 survivors of two downed patrol aircraft 50 miles south of Jaluit.

After seeing her first combat during the invasion of Majuro Atoll Marshall Islands (29 January-8 February 1944) Black rendered fine service in the Aitape and Hollandia New Guinea landings (22 April-7 May); Saipan invasion (11 June 4 July); capture of Guam (21 July-10 August); and Leyte operation (20-21 October and 13-14 November). The destroyer then returned to San Francisco for repairs which lasted until February 1945.

Repairs completed she sailed to Ulithi where upon arrival 13 March she reported to TF 58 for duty. Between 17 March and 30 May Black participated in the 5th and 3rd Fleet raids in support of the Okinawa operation. After a period of rest and upkeep at Leyte Gulf Black took part in the 3rd Fleet operations against Japan (10 July-15 August 1945) which hastened the end of the war.

After the cessation of hostilities Black remained off Japan assisting in the occupation until 1 September when as a unit of TF 72 she departed with the occupation forces for Inchon Korea. She served in the Far Fast on occupation duty until 10 November 1945 when she left Tsingtao China for the United States. Upon arrival Black reported for inactivation and was placed out of commission in reserve 5 August 1946 at Long Beach Calif.

Black was recommissioned 18 July 1951 and reported to the Atlantic Fleet. She participated in type and fleet operations along the eastern seaboard and in the Caribbean until 10 January 1953 when she departed Norfolk for the Pacific via the Panama Canal on a round-the-world cruise. She arrived off the coast of Korea 4 March and two days later commenced harassing fire on the beach. Black continued her Korean operations until 4 June 1953.

On 9 June Black departed for Norfolk via the Suez Canal arriving on the east coast 6 August. Until January 1955 she conducted type training fleet operations and plane guard duties along the east coast and in the Caribbean. In January 1955 Black transferred to the Pacific Fleet arriving at Long Beach 26 January. Since that time she has completed two tours of the western Pacific and has conducted local operations and anti-submarine warfare exercises along the west coast.


Add Your Name to the
DD-666 Crew Roster