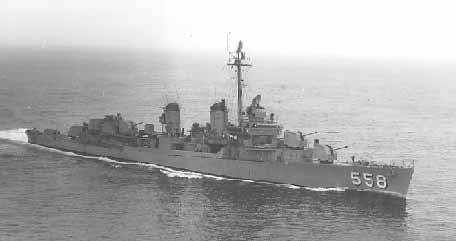 After shakedown Laws departed San Francisco 11 February 1944. joining the advance forces at Kwajalein 4 March. Following 2 weeks of ASW operations the destroyer sailed on the 20th to screen a refueling group supporting the raids on Palau. Yap and Ulithi. Laws continued ASW screening for the next month accompanying tankers as they replenished units during the Hollandia operation.

After a brief respite at Pearl Harbor the destroyer arrived at Roi Island 8 June to join a carrier group en route to Saipan. Reaching her destination on the 15th. Laws screened the carriers as they unleashed heavy air strikes on the islands. Two day's later enemy planes made a vain attempt to penetrate the screen and find the carriers. Laws 5-inch guns threw up a deadly barrage of antiaircraft fire. splashing two enemy planes and assisting in the downing of another. The destroyer remained in the Saipan area on patrol and screening duty until mid-August.

Additional bases were needed as staging areas for ships and aircraft during the planned Leyte invasion: and the Palau Island group was selected sailing with the carrier group 29 August. Laws stood by as the mighty force softened up the beaches for the upcoming assault. On 8 September the force turned its attention to the Philippines. launching airstrikes against Mindanao. While en route to their target friendly planes reported a Japanese force of 40 small craft off Santo Point. and Laws with three other destroyers and two cruisers were sent to intercept the group.

The carrier aircraft had already started to attack when the cruiser-destroyer force arrived on the scene. The enemy was no match for the Americans as Laws and her sister-ships launched a coordinated attack. wiping out the convoy. Laws continued screening carriers until arriving at Ulithi 1 October.

At sea again 6 October. she joined the carriers as they struck at Formosa and Okinawa before arriving off Leyte 2 weeks later. Laws remained offshore giving close support to the 20 October invasion. Since American occupation of the Philippines would cut squarely across enemy supply lines from the East Indies to the home islands. the Japanese could be expected to strike back at the invasion with their entire fleet.

Planes from TF 38 to which Laws was attached. contacted the Japanese center force 24 October as the enemy steamed toward San Bernadino. The Imperial Navy was no match for the powerful American Fleet losing their giant battleship Musashi in the ensuing engagement the Battle of the Sibuyan Sea. As American bombers and torpedo planes punished other enemy ships of the center force Admiral Halsey's search planes scoured the seas in quest of Japan's carriers. When they spotted Admiral Ozawa's force toward mid afternoon. Laws raced north with the carriers to intercept. They reached striking range during the early hours next morning: and shortly after dawn launched planes to begin a day - long pounding which sank four carriers and a destroyer.

Meanwhile. the Japanese suffered other crippling defeats at Surigao Strait and off Samar. When the last smoke from these momentous engagements - collectively known as the Battle of Leyte Gulf - had vanished Japan had all but lost its Imperial Navy the Philippines and all hope of winning the war. As the Japanese Navy Minister Admiral Yonai. reflected after the war ". . . defeat at Leyte was tantamount to the loss of the Philippines. When you took the Philippines that was the end of our resources."

Laws continued to screen the carriers air attacks on Leyte and Luzon for the rest of the year. Sailing with the carriers late in December she supported the amphibious assault on Luzon 6 January 1945. Bringing destruction closer to Tokyo her task group next concentrated raids on the China coast and Formosa before replenishing at Ulithi.

Departing 10 February Laws Joined a destroyer radar picket unit set up to give the carrier forces early warning of enemy attacks. On the 19th the destroyer screened the flattops as they struck Iwo Jima volcanic Island fortress needed for a B-29 airstrip. After supporting the campaign until success was assured Laws retired to Ulithi 12 March.

Preparations for the invasion of Okinawa the last remaining barrier on the road to Japan were now complete. Laws departed Ulithi 21 March to take up patrol station in advance of the planned 1 April invasion. Providing support for minesweeping operations and underwater demolition teams. the veteran destroyer proved her value. The Allies sweeping down on the enemy like a giant typhoon planted a garrison in Japan's backyard as Laws stood by on patrol and shore bombardment. On 6 April she splashed a Zeke as it made its ways to the fleet. The destroyer remained off Okinawa until the island was declared secure. and continued operations in its vicinity for the rest of the war.

With the war over Laws departed Ulithi 7 September. and arrived Bremerton Wash. 15 September. Later that year she steamed to San Diego where she remained until decommissioning 10 December 1946.

When the need arose for additional ships to support the Korean conflict. Laws recommissioned 2 November 1951 Cmdr. W. Y. Howell in command. After a Year of modernization and hunter-killer training operations. the destroyer departed San Diego 13 November 1962 for service in the Far East. Arriving Yokosuka 22 December Laws Joined TF-77 4 days later and steamed for the east coast of Korea. During January 1963 the destroyer remained off the coast to screen carriers engaged in raids on the embattled peninsula.

On 19 February Laws proceeded independently to Nando Island where she bombarded the shore supporting the 16th ROK Division by silencing two enemy shore emplacements 6 March. She continued operations in support of the American forces in Korea until late May when she sailed for patrol operations off Formosa. Laws completed her Far East tour early in July and arrived San Diego on the 20th.

Operating on a tactical training schedule for the next 7 months the destroyer departed on her second WestPac cruise 3 March 1954. She Joined the mighty 7th Fleet in peacekeeping operations and during the summer remained on alert to support the Chinese Nationalist positions in the Tachen Islands. Laws returned to San Diego 12 September and resumed training operations off the west coast for the rest of the year. From 1955 through 1957 Laws made annual cruises to the Far East for operations with the 7th Fleet including Taiwan patrol and training exercises.

On 1 July 1958 Laws was assigned to Reserve Escort Division 12 and commenced service as a training ship. She continued reserve cruises along the coast from Mazatlan Mexico to Canada until 2 February 1962 when she sailed on another WestPac cruise. While in the Far East Laws performed ASW exercises with the Korean and Nationalist Chinese Navy and remained on the alert during the tense Laos crisis.

Returning San Francisco 17 July the destroyer resumed operations as a Naval Reserve training ship and continued in this capacity until she decommissioned at Mare Island 30 March 1964. She remains in the Reserve Fleet at Mare Island.


Add Your Name to the
DD-558 Crew Roster