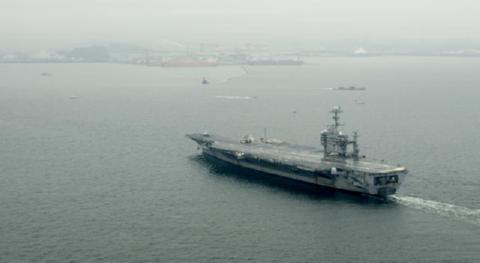 George Washington is a Nimitz-class nuclear-powered supercarrier commissioned in 1992. Though built in Virginia, her new home is in Japan.

George Washington was christianed by former First Lady Barbara Bush and participated in the 50th anniversary festivities for D-Day. She was deployed to Bosnia and Herzegovina in 1996 during Operation Decisive Endeavor. She also participated in Operation Southern Watch in Iraq, enforcing a No Fly Zone in both operations.

GW was deployed several times to the Persian Gulf, playing a key role in the U.S. military missions. She assisted in US Maritime Interception Operations and diverted tens of thousands of tons of oil.

In 2001, she returned to port for several upgrades to her systems and architecture. Following this upgrade, she sailed to New York and spent three days assisting with airspace defense over the city in response to the 9/11 attacks.

In 2005, GW began preparations to move to Japan. In 2008, all upgrades were made and she set sail from the East Coast. En route, she suffered severe damage in Rio De Janeiro, Brazil when fire occurred in her air conditioning/refrigeration space and boiler room, caused by nearby smoking in an unauthorized area. After repairs were made, she finally set sail for her new home in Japan.


Add Your Name to the
CVN-73 Crew Roster