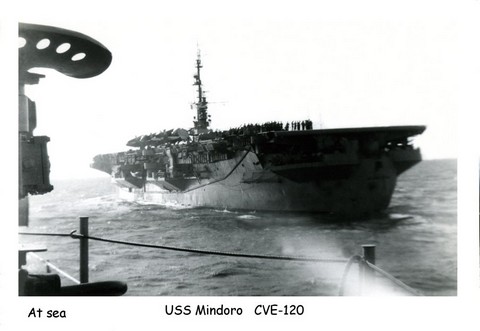 First launched in June 1945, the USS Mindoro was a nearly 11,400-ton Commencement Bay-class escort carrier that could carry up to 33 aircraft at any given time. Like many other carriers produced during this decade, the USS Mindoro CVE-120 was constructed in Tacoma, Washington by Todd-Pacific Shipyards, Inc.

After a relatively quick construction, the USS Mindoro was initially commissioned in December 1945 and placed in the command of Captain Edwin R. Peck. In her first series of operations, the USS Mindoro was assigned to Carrier Division 14, based in Norfolk, Virginia. She conducted various training operations up and down the East Coast.

By 1947, the USS Mindoro had joined the 8th Fleet in the West Indies and was playing an important role in training naval pilots and performing cutting-edge, top-secret hunter-killer exercises. These runs typically occurred anywhere between the Davis Strait to the Carribean to the British Isles. The extent of her training capabilities, as well as her crews' knowledge and professionalism, earned her the right to participate in two Mediterranean missions (in 1950 and 1954) with the 6th Fleet.

The following year, the USS Mindoro was decommissioned in Boston and ordered to join the Atlantic Reserve Fleet. Despite undergoing a series of repairs and being reclassified as a Hunter-Killer craft (AKV-20), in December 1959, the USS Mindoro was removed from the official Naval Register. By June 1960, she had been sent to Hong Kong for scrapping.

Despite never serving in wartime nor earning any battle stars, the USS Mindoro's superior training abilities earned her recognition by the Naval History & Heritage Command Center, which is based in Washington, D.C.

The USS Mindoro was initially named for the 7th largest island, southwest of Luzon, in the Philippines.


Add Your Name to the
CVE-120 Crew Roster