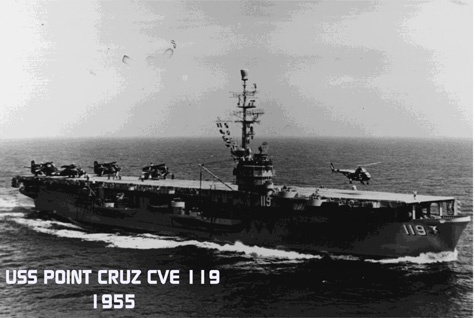 Originally named Trocadero Bay, the USS Point Cruz was an escort carrier that weighed 10,900 tons and was first laid down in 1944 in Tacoma, Washington. While it was first launched in May 1945, the USS Point Cruz would not be commissioned for another five months, until October 1945. At this time, it was assigned under the command of Captain Douglas T. Day. Like other Commencement Bay-class carriers built at the time, the USS Point Cruz spent her early years training pilots and ferrying aircraft between different bases.

Two years later, in May 1947, was deactivated and sent to be stored at the Puget Sound Naval Shipyard. Three months later, the Navy officially decommissioned the USS Point Cruz, and she was sent to Bremerton, Washington to join the Pacific Reserve Fleet.

The outbreak of adversity in Korea brought many escort carriers out of decommission, and the USS Point Cruz was no exception. In July 1951, was recommissioned and assigned under the command of Captain Horace Butterfield. After performing a series of coastal operations in the U.S., the USS Point Cruz underwent a massive overhaul that would transform her into an anti-submarine warfare vessel (which now classified her as a “Hunter-Killer Group carrier”).

Following several months of repairs, the USS Point Cruz headed for the Far East where it was ordered to patrol the Korean coast (in 1953) under the command of Captain John T. Hayward. When an armistice was signed that summer (July 1953), the USS Point Cruz played a role in “Operation Platform,” in which it became base for helicopters that were air lifting Indian soldiers to a buffer zone, as part of the exchange of prisoners of war.

While the USS Point Cruz would return to Asian waters two more times following the end of the Korean War, in August of 1956, she was decommissioned and assigned to the Pacific Reserve Fleet in the Bremerton Group. During this time, she was reclassified to be an aircraft transport carrier, AKV-19.

Nearly, a decade later in 1965, the USS Point Cruz would be recommissioned for the last time, serving as logistical support for U.S. troops in South East Asia. Her primary role involved serving as an aircraft ferry fro the Military Sea Transportation Service (MSTS).

Final Disposition: Sold and scrapped in 1971


Add Your Name to the
CVE-119 Crew Roster