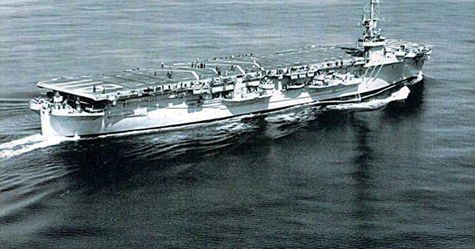 USS Sicily was built at Tacoma, Washington and commissioned in February of 1946. She joined the Atlantic Fleet and served there until April of 1950 when she went back to the Pacific. Once the Korean War started, the Commencement Bay class escort carrier was sent immediately to the western Pacific to provide anti-submarine support.

However, she ended up supporting combat forces that were working onshore, defending the Pusan Perimeter and the Inchon landings. She then went back to anti-submarine support and then again helped with ground operations. These tasks went back and forth for some time, before her first tour ended in 1951.

Sicily made two more cruises to the combat area during 1951 and 1952, providing various types of support and getting involved in combat operations wherever she was needed. In the second cruise, the ship was responsible for operating Marine Helicopters to experiment with vertical envelopment techniques.

The war was nearing an end when the ship returned to the U.S. in 1954. She was decommissioned after this last deployment, the ship was put in the Pacific Reserve Fleet and reclassified in 1959, although she never returned to combat. In November of 1960, the ship was sold for scrapping.


Add Your Name to the
CVE-118 Crew Roster