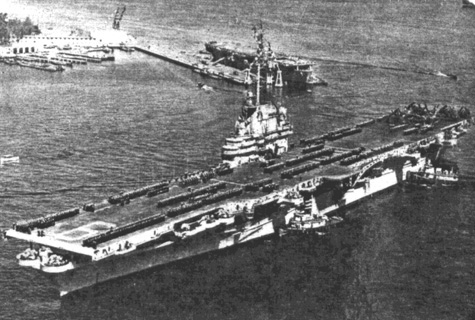 USS Essex (CV-9) was a highly decorated aircraft carrier used in World War II and the Korean War. She was built in 1942 and was a key player in many victorious battles. She was the first carrier in her class, the Essex class.

Essex was modernized and readied to support US and UN troops in the Korean War. She toured the West Pacific and supported missions as far as the Yalu River on the border of China and Korea.

Following her shakedown cruise Essex sailed to the Pacific in May 1943 to begin a succession of victories which would bring her to Tokyo Bay. Departing Pearl Harbor she participated with TF 16 in carrier operations against Marcus Island (31 Aug ust 1943); was designated flagship of TF 14 and struck Wake Island (5-6 October); launched an attack with TG 50.3 against the Gilbert Islands where she also took part in her first amphibious assault the landing on Tarawa (18-23 November). Refueling at se a she cruised as [367] flagship of TG 50.3 to attack Kwajalein (4 December). Her second amphibious assault delivered in company with TG 58.2 was against the Marshalls (29 January-2 February 1944).

Essex in TG 68.2 now joined with TG 58.1 and 58.3 to constitute the most formidable carrier striking force to date in launching an attack against Truk (17-18 February) during which eight Japanese ships weresunk. En route to the Marianas to sev er Japanese supply lines the carrier force was detected and received a prolonged aerial attack which it repelled in a businesslike manner and then continued with the scheduled attack upon Saipan Tinian and Guam (23 February).

After this operation Essex proceeded to San Francisco for her single wartime overhaul. She then joined carriers Wasp (CV-18) and San Jacinto (CVL-30) in TG 12.1 to strike Marcus Island (19-20 May) and Wake(23 May). She deployed wit h TF 58 to support the occupation of the Marianas (12 June-10 August); sortied with TG 38.3 to lead an attack against the Palau Islands (6-8 September) and Mindanao (9-10 September) with enemy shipping as the main target and remained in the area to supp ort landings on Peleliu. On 2 October she weathered a typhoon and 4 days later departed with TF 38 for the Ryukyus.

For the remainder of 1944 she continued her frontline action participating in strikes against Okinawa (10 October) and Formosa (12-14 October) covering the Leyte landings taking part in the battle for Leyte Gulf (24-25 October) and continuing the search for enemy fleet units until 30 October when she returned to Ulithi Caroline Islands for replenishment. She resumed the offensive and delivered attacks on Manila and the northern Philippine Islands during November. On 25 November for the first ti me in her far-ranging operations and destruction to the enemy Essex received injury. A kamikaze hit the port edge of her flight deck landing among planes gassed for takeoff causing extensive damage killing 15 and wounding 44.

This "cramped her style" very little. Following quick repairs we find her with 3d Fleet off Luzon supporting the occupation of Mindoro (14-16 December). She rode out the typhoon of 18 December and made special search for survivors afterwards. With TG 3 8.3 she participated in the Lingayen Gulf operations launched strikes against Formosa Sakishima Okinawa and Luzon. Entering the South China Sea in search of enemy surface forces the task force pounded shipping and conducted strikes on Formosa the Ch ina coast Hainan and Hong Kong. Essex withstood the onslaught of the third typhoon in 4 months (20-21 January 1945) before striking again at Formosa Miyako Shima and Okinawa (26-27 January).

During the remainder of the war she operated with TF 58 conducting attacks against the Tokyo area (16-17 and 25 February) both to neutralize the enemy's airpower before the landings on Iwo Jima and to cripple the aircraft manufacturing industry. She sent support missions against Iwo Jima and neighboring islands but from 23 March to 28 May was employed primarily to support the conquest of Okinawa.

In the closing days of the war Essex took part in the final telling raids against the Japanese home islands (10 July-15 August). Following the surrender she continued defensive combat air patrols until 3 September when she was ordered to Breme rton Wash. for inactivation. On 9 January 1947 she was placed out of commission in reserve.

Modernization endowed Essex with a new flight deck and a streamlined island superstructure on 16 January 1951 when recommissioned Captain A. W. Wheelock commanding.

After a brief cruise in Hawaiian waters she began the first of three tours in Far Eastern waters during the Korean war. She served as flagship for Carrier Division 1 and TF 77. She was the first carrier to launch F2H "Banshee" twinjet fighters on comba t missions; on 16 September 1951 one of these planes damaged in combat crashed into aircraft parked on the forward flight deck causing an explosion and fire which killed seven. After repairs at Yokosuka she returned to frontline action on 3 October to l aunch strikes up to the Yalu River and provide close air support for U.N. troops.

On 1 December 1953 she started her final tour of the war sailing the China Sea with the Peace Patrol. From November 1954 to June 1955 she engaged in training exercises operated for 3 months with the 7th Fleet assisted in the Tachen Islands evacuatio n and engaged in air operations and fleet manuevers off Okinawa.

In July 1955 Essex entered Puget Sound Naval Shipyard for repairs and extensive alterations including installation of an angled flight deck. Modernization completed she rejoined the Pacific Fleet in March 1956. For the next 14 months the carri er operated off the west coast except for a 6-month cruise with the 7th Fleet in the Far East. Ordered to join the Atlantic Fleet for the first time in her long career she sailed from San Diego on 21 June 1957 rounded Cape Horn and arrived in Mayport Fla. on 1 August.

In the fall of 1957 Essex participated as an anti-submarine carrier in the NATO exercises "Strike Back " and in February 1968 deployed with the 6th Fleet until May when she shifted to the eastern Mediterranean. Alerted to the Middle East crisis on 14 July 1958 she sped to support the U.S. Peace Force landing in Beirut Lebanon launching reconnaissance and patrol missions until 20 August. Once again she was ordered to proceed to Asian waters and transmitted the Suez Canal to arrive in the Taiw an operational area where she joined TF 77 in conducting flight operations before rounding the Horn and proceeding back to Mayport.

Essex joined with the 2d Fleet and British ships in Atlantic exercises and with NATO forces in the eastern Mediterranean during the fall of 1959. In December she aided victims of a disastrous flood at Frejus France.

In the spring of 1960 she was converted into an ASW Support Carrier and was thereafter homeported at Quonset Point R.I. Since that time she has operated as flagship of Carrier Division 18 and Antisubmarine Carrier Group Three. She conducted rescue and salvage operations off the New Jersey coast for a downed blimp; cruised with midshipmen and was deployed on NATO and CENTO exercises. In November she joined the French navy in Operation "Jet Stream" and since that time has continued her widespread activ ities in protection of freedom and peace.


Add Your Name to the
CV-9 Crew Roster