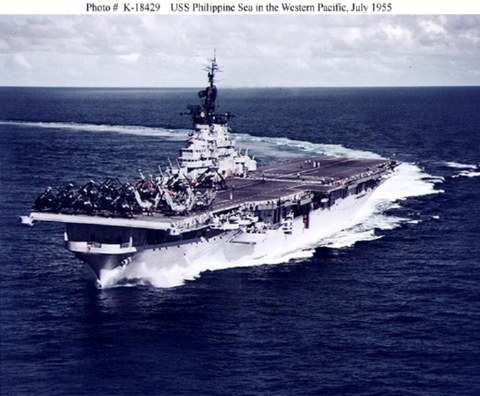 USS Philippine Sea was built in Quincy, Massachusetts and was commissioned in May 1946. She was named for the Battle of the Philippine Sea fought in 1944. During her first few years, the ship undertook deployments to the Caribbean, Atlantic and Mediterranean. In 1947, the ship took part in the Antarctic expedition by Rear Admiral Byrd. In May 1950, the ship was sent to the Pacific Fleet.

A couple of months later, the ship was sent to support troops in the Korean combat zone. This was the first of her three deployments to Korea. Between her second and third combat deployments, in October 1952, she received a new designation as CVA-47.

When the Korean War ended, the Philippine Sea had two more tours in the Far East. On one voyage, her crew successfully fought off two Chinese fighters. After that second tour, the ship was converted to anti-submarine support aircraft. Her hull designation changed again to CVS-47. In 1957 and 1958, the ship made two more voyages to the western Pacific.

She was formally decommissioned in December 1958. She served as aircraft transport for the next decade in the Pacific Reserve Fleet. She was struck from the Naval Vessel Register in December 1969.

Named for: Battle of the Philippine Sea


Add Your Name to the
CV-47 Crew Roster