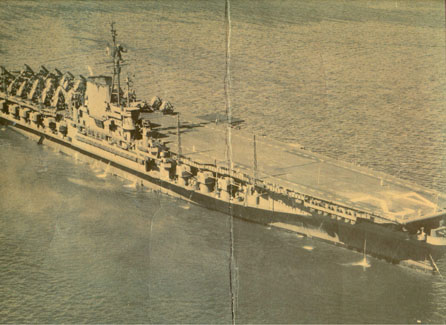 USS Franklin D. Roosevelt was commissioned on Oct. 27, 1945 and served until October 1977. She was built at the New York Navy Yard. After her initial shakedown voyage, she was deployed with the Eighth Fleet in spring 1946 for major training exercises. Her first deployment to the Mediterranean came later that same year.

As the Cold War began to escalate, she regularly participated in operations with the Sixth Fleet near Southern Europe. She regularly carried conventional and nuclear-armed aircraft. In October 1952, she was reclassified as an attack aircraft carrier. This changed her hull number to CVA-42. From 1954 to 1956, the ship went through a modernization on the US west coast. In November, 1956, the new and improved aircraft carrier returned to the east coast.

For the next decade, Franklin D. Roosevelt made several return trips to the Mediterranean. In March 1961, the ship recorded the 100,000th landing on her deck. The only cruise to the Western Pacific came in late 1966 through early 1967. She underwent a further modernization and then returned to the Mediterranean for many more voyages through the 1970’s. In June 1975, her hull number changed again to CV-42. After completing her 23 voyage, the ship was decommissioned.

During her shakedown cruise Franklin D. Roosevelt called at Rio de Janeiro 1 to l1 February 1946 to represent the United States at the inauguration of the Brazilian president Eurico G. Dutra who came aboard for a short cruise. Fleet maneuvers and other training operations in the Caribbean preceded her first deployment to the Mediterranean from 8 August to 4 October during which she was a part of a U.S. Navy force which visited Athens to bolster the government of Greece during its successful f ight against the Communist. She received thousands of visitors during her calls to many Mediterranean ports giving Europeans an opportunity to view this impressive addition to America's seapower for peace. The first opportunity for general visiting by the American public came at New York City during Navy Day celebrations of late October.

Franklin D. Roosevelt operated off the east coast until July 1947 when she entered Norfolk Naval Ship Yard for a prolonged overhaul during which she received improvements to her equipment and facilities. On 13 September 1948 the carrier sailed from Norfolk for a second tour of duty with the Mediterranean forces from which she returned 23 January 1949. During the next 5 years Franklin D. Roosevelt took part in intensive operations off the Virginia Capes along the east coast and in th e Caribbean and made four tours of duty in the Mediterranean. Assigned to extensive conversion at Puget Sound Naval Ship Yard the carrier sailed from Norfolk 7 January 1954. Too large to pass through the Panama Canal she rounded Cape Horn and arrive d at the shipyard 5 March. She was decommissioned there 23 April 1954.

In February 1957 Franklin D. Roosevelt sailed to the Gulf of Maine for cold weather tests of catapults aircraft and other carrier equipment including the "Regulus" guided missile. In July she sailed for the first of three post-conversion cr uises to the Mediterranean completed through 1960. Her assignments in the Mediterranean added NATO exercises to her normal schedule of major fleet operations and found her each year entertaining a distinguished list of guests. A constant emphasis on he r stateside operations was development of advanced tactics and procedures.


Add Your Name to the
CV-42 Crew Roster