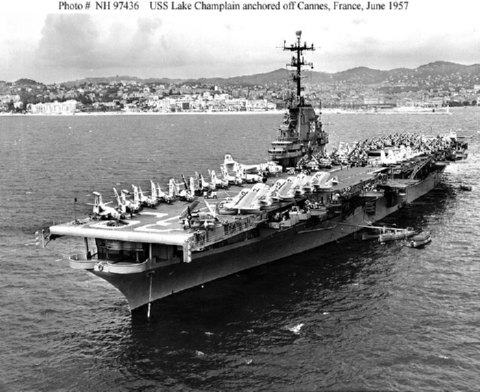 Named for: Battle of Lake Champlain

After shakedown and visits to New York and Philadelphia Lake Champlain was assigned to "Magic Carpet" duty departed Norfolk for England 14 October and arrived Southampton the 19th where she embarked veterans and returned them to New York .

She set a speed record for crossing the Atlantic 26 November 1945 when she arrived at Hampton Roads Va. having completed a run from Cape Spartel Africa in 4 days 8 hours 51 minutes. This record stood until surpassed by SS United States in the summer of 1952.

Lake Champlain retired to the "Mothball Fleet" at Norfolk Va. 17 February 1947. After the United States had allowed her active military strength to shrink to the danger point the Communists struck in Korea. Fortunately we had ships in reserv e though it took time to obtain and train crews and provide materiel. Lake Champlain was reactivated and modernized at Newport News Shipbuilding & Drydock Co. and recommissioned 19 September 1952 Capt. G. T. Mundroff in command.

After shakedown in Cuban and Haitian waters 25 November through 25 December the carrier departed Mayport Fla. for Korea 26 April 1953 via the Red Sea Indian Ocean and China Sea becoming the largest ship to transit the Suez Canal. She moored at Yo kosuka Japan 9 June 1953.

In the years that followed Lake Champlain made several cruises to the Mediterranean participating with NATO forces. On 25 April 1957 she joined elements of the fleet in a high-speed run to the scene of tension in the Middle East cruising in t he vicinity of Lebanon and backing Jordan's stand against the threat of Communism. The swift and firm reaction averted a near catastrophe in the Middle East. Tension eased and Lake Champlain returned to Mayport 27 July. Converted to an antisubma rine carrier an d reclassified (CVS-39) on 1 August Lake Champlain trained off the eastern seaboard to master her new role. She departed Bayonne N.J. 8 February 1958 for a Mediterranean cruise returning 30 October to Mayport Fla. After yard o verhaul she departed f or the Mediterranean 10 June and visited Spain Denmark and Scotland before returning to Mayport 9 August.

The carrier operated off Florida and in the Caribbean until 15 June 1958 when she sailed on another Mediterranean cruise returning to her newly assigned home port Quonset Point R.I. 4 September.

The carrier operated out of Quonset Point R.I. until 29 June 1960 when she made a midshipmen cruise to Halifax returning 12 August. Beginning 7 February she made a cruise to the Caribbean returning 2 March.

Lake Champlain was selected as the prime recovery ship for the first manned space flight. She sailed for the recovery area 1 May and was on station on the 5th when Comdr. Alan Sheppard splashed down in spacecraft Freedom 7 some 300 miles down r ange from Cape Kennedy. Helicopters from the carrier visually followed the descent of the capsule and were over the astronaut 2 minutes after the impact. They skillfully recovered Astronaut Sheppard and Freedom 7 and carried them safely to Lake < I>Champlain's flight deck.

For the next year the ship operated along the Atlantic coast and in the Caribbean. In June 1962 she embarked Naval Academy midshipmen for a summer cruise to Halifax Nova Scotia and Kingston Jamaica where she represented the United States at the isla nd's celebration of its independence 3 August.

On 24 October Lake Champlain joined in a classic exercise of seapower--the quarantine of Cuba where the Soviet Union was constructing bases for offensive missiles. To block this grave threat U.S. warships deployed throughout the western Atlant ic choking off the flow of military supplies to Cuba and enforcing American demands for the withdrawal of the Russian offensive missiles.

After the American demands were substantially complied with Lake Champlain sailed for home 23 November via St. Thomas Virgin Islands and arrived Quonset Point 4 December 1962. For the next few months the carrier was in New England wat ers for operations and overhaul. In September 1963 while she was on a cruise to Guantanamo Bay her training schedule was interrupted when she was ordered to Haiti to relieve distress caused by Hurricane "Jane." Her helicopters located homeless victims and flew them food and medical supplies.

Lake Champlain returned to Quonset Point 9 November for operations in New England waters. She visited Bermuda briefly in spring of 1964 and steamed to Spain in the fall for landings near Huelva. She sailed 6 November from Barcelona for the Unite d States touched at Gibraltar and arrived at Quonset Point the 25th. The first half of 1965 found the Lake Champlain performing training duties and conducting exercises up and down the East Coast. The last major duty of her career occurr ed on 5 August when s he served as the primary recovery ship for Gemini 5. Soon after this duty was completed she sailed to Philadelphia where she commenced inactivation. She was decommissioned 2 May 1966.


Add Your Name to the
CV-39 Crew Roster