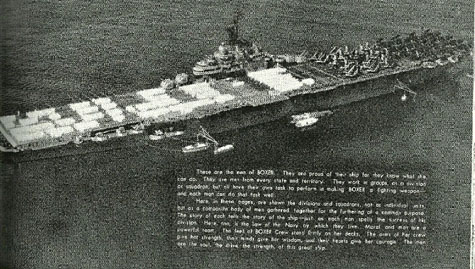 The CV-21 USS Boxer is a 27,100-ton aircraft carrier of the Essex class, and was commissioned in April of 1945. The initial training was not completed until after World War II ended, but she was on active duty in the Pacific after the war. In all, there were 10 deployments of the USS Boxer to the Western Pacific between 1945 and 1957.

In June of 1950, the USS Boxer had just recently returned from one such deployment and then the Korean War broke out. She was used to carry personnel and planes from the Navy and Air Force into the war zone, and was then put into combat service during September and October of that year.

After three additional Korean War deployments between 1951 and 1953, the USS Boxer was assigned to serve with the Seventh Fleet as an attack carrier for two cruises. In early 1956 she was converted into an anti-submarine warfare vessel and made her final deployment to the Western Pacific as such.

USS Boxer was used in 1957 as part of an experimental assault helicopter ship, and then became the flagship for Operation Hardtack in 1958. She then went on to become part of the Atlantic Fleet and operated as part of the U.S. amphibious warfare capabilities through the next decade. After a short stint in Vietnam, she was decommissioned in 1969 and sold for scrapping in 1971.

departed San Diego for her second Korean tour 2 March 1951. Again she operated with TF 77 supporting the ground troops. She returned to San Francisco 24 October 1951. Sailing 8 February 1952 for her third tour in Korea Boxer again served with TF 77. During 23-24 June her planes took part in the heavy strikes against the North Korean hydro-electric complex and on 5 August she had nine men killed and two seriously injured in a fire which swept the hangar deck. After emergency repairs at Yokosuka Japan (11-23 August) Boxer returned to duty off Korea. She arrived at San Francisco 25 September and underwent repairs until March 1953.


Add Your Name to the
CV-21 Crew Roster