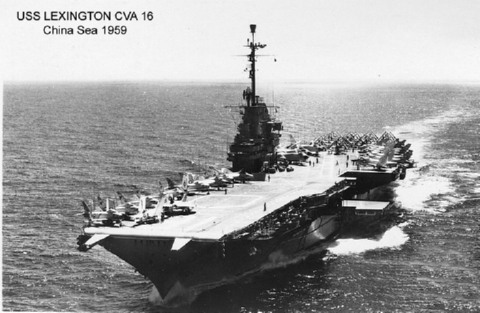 Lexington was one of many ships that was commissioned in the dawn of World War II and sent to the initial raids on Tarawa and Wake in the fall of 1943. Lexington also helped in the campaigns of the Gilbert Islands and the battle against the Japanese in the Marshall Islands. In December of that year, the ship was hit by a night attack, forcing her to return to the shipyard for two months of repairs. The USS Lexington was back on duty in early 1944 and was involved in many Pacific combats during the following months.

Lexington went home in 1945 after the Iwo Jima invasion for an overhaul, and then returned in July and August to help with the end of the Pacific War. In December, the USS Lexington was sent home and was then decommissioned in Bremerton, Washington in 1947. She sat in ‘mothballs’ for six years, and then underwent major modernizations that were completed in 1955 and was recommissioned as an attack aircraft carrier. She made five deployments to the Western Pacific up until 1961 and was then transferred to the Atlantic.

For 30 years after that, the USS Lexington operated in the Gulf of Mexico as a training vessel, and then was decommissioned in 1991. She was transferred to a private organization and was turned into a museum ship in Corpus Christi, Texas in 1992.

After Caribbean shakedown and yard work at Boston Lexington sailed for Pacific action via the Panama Canal arriving Pearl Harbor 9 August 1943. She raided Tarawa in late September and Wake in October then returned Pearl Harbor to prepare for the Gilbert Islands operation. From 19 to 24 November she made searches and flew sorties in the Marshalls covering the landings in the Gilberts. Her aviators downed 29 enemy aircraft on 23 and 24 November.

Lexington sailed to raid Kwajalein 4 December. Her morning strike destroyed a cargo ship damaged two cruisers and accounted for 30 enemy aircraft. Her gunners splashed two of the enemy torpedo planes that attacked at midday and opened fire ag ain at 1920 that night when a mayor air attack began. At 2322 parachute flares silhouetted the carrier and 10 minutes later she was hit by a torpedo to starboard knocking out her steering gear. Settling 5 feet by the stern the carrier began circling to port amidst dense clouds of smoke pouring from ruptured tanks aft. An emergency hand-operated steering unit was quickly devised and Lexington made Pearl Harbor for emergency repairs arriving 9 December. She reached Bremerton Wash. 22 December for full repairs completed 20 February 1944.

A surprise fighter strike on Saipan 11 June virtually eliminated all air opposition over the island then battered from the air for the next 5 days. On 16 June Lexington fought off a fierce attack by Japanese torpedo planes based on Guam once a gain to emerge unhurt but sunk a third time by propaganda pronouncements. As Japanese opposition to the Mariannas operation provoked the Battle of the Philippine Sea 19 and 20 June Lexington played a mayor role in TF 58's great victory. With over 300 enemy aircraft destroyed the first day and a carrier a tanker and a destroyer sunk the second day American aviators virtually knocked Japanese naval aviation out of the war; for with the planes went the trained and experienced pilots without whom Japan could not continue air warfare at sea.

Using Eniwetok as her base Lexington flew sorties over Guam and against the Palaus and Bonins into August. She arrived in the Carolinas 6 September for 3 days of strikes against Yap and Ulithi then began attacks on Mindanao the Visayas the M anila area and shipping along the west coast of Luzon preparing for the coming assault on Leyte. Her task force then blasted Okinawa 10 October and Formosa 2 days later to destroy bases from which opposition to the Philippines campaign might be launched . She was again unscathed through the air battle fought after the Formosa assault.

Now covering the Leyte landings Lexington's planes scored importantly in the Battle for Leyte Gulf the climactic American naval victory over Japan. While the carrier came under constant enemy attack in the engagement in which Princeton was sunk her planes joined in sinking Japan's superbattleship Musashi and scored hits on three cruisers 24 October. Next day with Essex aircraft they sank carrier Chitose and alone sank Zuikako. Later in the day they aided in sinking a third carrier Zuiho. As the retiring Japanese were pursued her planes sank heavy cruiser Nachi with four torpedo hits 5 November off Luzon.

But in the same action she was introduced to the kamikaze as a flaming Japanese plane crashed near her island destroying most of the island structure and spraying fire in all directions. Within 20 minutes mayor blazes were under control and she was able to continue normal flight actions her guns knocking down a would-be kamikaze heading for carrier Ticonderoga as well. On 9 November Lexington arrived Ulithi to repair battle damage and learn that Tokyo once again claimed her destroyed.

Chosen flagship for TG 58.2 on 11 December she struck at the airfields of Luzon and Formosa during the first 9 days of January 1945 encountering little enemy opposition. The task force then entered the China Sea to strike enemy shipping and air insta llations. Strikes were flown against Saipan Camranh Bay in then Indochina Hong Kong the Pescadores and Formosa. Task force planes sank four merchant ships and four escorts in one convoy and destroyed at least 12 in another at Camranh Bay 12 January. Leaving the China Sea 20 January Lexington sailed north to strike Formosa again 21 January and Okinawa again 22 January.

After replenishing at Ulithi TG 58.2 sailed 10 February to hit airfields near Tokyo 16 and 17 February to minimize opposition to the Iwo Jima landings 19 February. Lexington flew close support for the assaulting troops 19 to 22 February then s ailed for further strikes against the Jap- [106] anese home islands and the Nansei Shoto before heading for overhaul at Puget Sound.

Lexington was combat bound again 22 May sailing via Alameda and Pearl Harbor for San Pedro Bay Leyte where she joined Rear Adm. T. L Sprague's task force for the final round of airstrikes which battered the Japanese home islands through July until 15 August when the last strike was ordered to jettison its bombs and return to Lexington on receiving word of Japanese surrender. During this period she had launched attacks on Honshu and Hokkaido airfields and Yokosuka and Kure naval bases to destroy the remnants of the Japanese fleet. She had also flown bombing attacks on industrial targets in the Tokyo area.

After hostilities ended she continued to fly precautionary patrols over Japan and dropped supplies to prisoner of war camps on Honshu. She supported the occupation of Japan until leaving Tokyo Bay 3 December with homeward bound veterans for transport ation to San Francisco where she arrived 16 December.

Lexington recommissioned 15 August 1955 Capt. A. S. Heyward Jr. in command. Assigned San Diego as her home port she operated off California until May 1956 sailing then for a 6-month deployment with the 7th Fleet. She based on Yokosuka for ex ercises maneuvers and search and rescue missions off the coast of China and called at major Far Eastern ports until returning San Diego 20 December. She next trained Air Group 12 which deployed with her on the next 7th Fleet deployment. Arriving Yokos uka 1 June 1957 Lexington embarked Rear Adm. H. D. Riley Commander Carrier Division 1 and sailed as his flagship until returning San Diego 17 October.

Following overhaul at Bremerton her refresher training was interrupted by the Lebanon crisis; on 14 July 1958 she was ordered to embark Air Group 21 at San Francisco and sail to reinforce the 7th Fleet off Taiwan arriving on station 7 August. With an other peacekeeping mission of the U.S. Navy successfully accomplished she returned San Diego 19 December. Now the first carrier whose planes were armed with air-to-surface Bullpup guided missile Lexington left San Francisco 26 April 1959 for anot her tour of duty with the 7th Fleet. She was on standby alert during the Laotian crisis of late August and September then exercised with British forces before sailing from Yokosuka 16 November for San Diego arriving 2 December. Through early 1960 she ov erhauled at Puget Sound Naval Shipyard.

Lexington's next Far Eastern tour began late in 1960 and was extended well into 1961 by renewed tension in Laos. Returning to west coast operations she was ordered in January 1962 to prepare to relieve Antietam (CVS-36) as aviation train ing carrier in the Gulf of Mexico and she was redesignated CVS-16 on 1 October 1962. However during the Cuban missile crisis she resumed duty as an attack carrier and it was not until 29 December 1963 that she relieved Antietam at Pensacola.

Into 1969 Lexington has operated out of her home port Pensacola as well as Corpus Christi and New Orleans qualifying student aviators and maintaining the high state oft training of both active duty and reserve naval aviators. Her work has be en of increasing significance as she has prepared the men vital to the continuing Navy and Marine Corps operations over Vietnam where naval aviation has played a major role in defending the cause of freedom. Lexington marked her 200 000th arrested landing 17 October 1967 and was redesignated CVT-16 on 1 January 1969.


Add Your Name to the
CV-16 Crew Roster