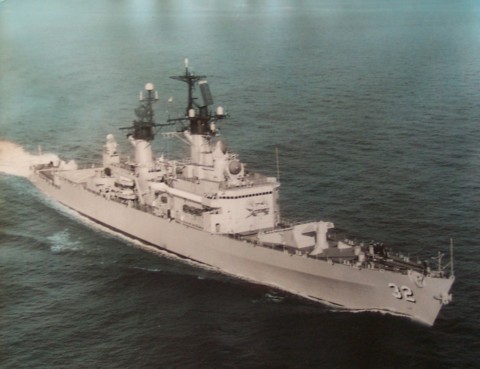 Following an underway period on the Atlantic Fleet Weapons Range and a visit to Frederikstad, St. Croix, Virgin Islands, William H. Standley prepared for her first deployment to the Mediterranean. On 6 October 1967, the guided-missile frigate stood out to sea, leaving Mayport in her wake, bound for the ship's first tour of duty with the 6th Fleet.

Transiting the Atlantic in company with Goodrich (DDR-831) and Turner (DDR-834), William H. Standley joined Task Group (TG) 60.2 as flagship for ComDesRon 8 upon her arrival in the Mediterranean. While attached to the 6th Fleet, the guided-missile frigate witnessed the rapid build-up of Soviet naval strength in the Mediterranean basin and visited the ports of Palma de Majorca, Spain; Valetta, Malta; Naples, Italy; and Suda Bay, Crete.

For the first three months of 1968, William H. Standley participated in a bilateral exercise with French naval units, "Phiblex 10-68," and conducted picket duty in the eastern Mediterranean, before she sailed for home late in March 1968.

Arriving back at her home port on the 28th, William H. Standley spent a month undergoing post-deployment upkeep, before she conducted planeguard duty for Intrepid (CVS-11) in May. Soon thereafter, she responded to an emergency recall and got underway to search for the missing Scorpion (SSN-589), the atomic submarine that had disappeared somewhere south of the Azores while en route back to the United States from a Mediterranean deployment.

William H. Standley conducted an Atlantic transit with ComDesRon 8 embarked and, in company with five submarines and four destroyers, took part in the extensive hunt for the missing submarine. The Navy officially declared Scorpion as lost on 5 June; and William H. Standley returned to Mayport the following day.

Later in June, the guided missile frigate embarked 40 midshipmen and took those officers-to-be on their summer cruise before disembarking them at Norfolk, Va., late in July. William H. Standley entered the Charleston (S.C.) Naval Shipyard early in August for restricted availability and received alterations that would permit her to function as a PIRAZ (Positive Identification Radar and Advisory Zone) ship to conduct operations in Southeast Asia.

After sea trials and a final in-port period at May-port, William H. Standley departed her home port on 2 December for her first deployment to the Western Pacific (WestPac) area. After a brief stop at the Atlantic Fleet Weapons Range at San Juan, Puerto Rico, William H. Standley proceeded onward, transiting the Panama Canal for the first time on 9 December.

Departing Subic Bay on 23 January for the Gulf of Tonkin, William H. Standley arrived on station and relieved Mahan (DLG-11) as PIRAZ ship. During her month on station, the guided missile frigate maximized the use of her communications systems and her tactical data collection facilities, contributing significantly to 7th Fleet operations off the coast of Vietnam.

Relieved by Mahan on 25 February, William H. Standley sailed for Japan and reached Sasebo five days later for upkeep and recreation. Departing that Japanese port on 14 March, the guided missile frigate arrived at Subic Bay on the 17th for three days of training.

Resuming her operations in Vietnamese waters on 22 March, William H. Standley began a "difficult and demanding line period." Tensions in Korea had erupted, causing the American naval forces in the Par East to go on alert. North Korean and American forces had exchanged fire briefly near the demilitarized zone between the two Koreas on 11 March; and, on 15 April, North Korean fighters downed an EC-121 reconnaissance plane over international waters in the Sea of Japan. The plane, based at Atsugi, Japan, crashed with 31 men on board.

During her 50 days on the "line," William H. Stand-ley spent approximately half the time on PIRAZ station and half on the southern Sea Air Rescue (SAR) station. Operational requirements necessitated the southward movement and required the ship to base two helicopters simultaneously. William H. Standley met the test, earning a commendatory message from Rear Admiral E. J. Rudd, entitled: "Stellar Standley."

Relieved by King (DLG-10) on station, William H. Standley sailed to Hong Kong for some well-earned rest and recreation, arriving at the British Crown Colony on 18 May. Departing on the 24th, the guided missile frigate sailed for Japanese waters and reached Yokosuka on 28 May.

William H. Standley returned to the "line" after eight days of intensive upkeep, relieving Sterett (DLG-31) as southern SAR ship on 9 June. For the next nine days, the guided missile frigate acted as SAR and strike support ship for the aircraft carriers stationed in the Gulf of Tonkin. Relieved by Chicago (CG-11) on 18 June, William H. Standley reached Pearl Harbor on Independence Day, pushing on for the Galapagos the next day. Transiting the Panama Canal on 16 July, the guided missile frigate reached Mayport on 20 July.

From September through the year's end, William H. Standley remained at Mayport, preparing for her second WestPac cruise. Underway on 5 January 1971, the guided missile frigate transited the Panama Canal four days later, and reached Pearl Harbor on the 23d. After four days in Hawaii, the ship took in her lines and headed for the Marianas, arriving at Guam on 5 February for a six-hour fueling stop.

Upon leaving Guam, William H. Standley set course for Subic Bay and, after assisting a merchantman in distress, the Philippine freighter Santa Anna, reached her destination on 10 February. Two days later, she sailed for the Gulf of Tonkin.

For the next 25 days, William H. Standley escorted Ranger (CVA-61) on the northern SAR station, before she put into Sasebo for a port visit. After brief patrol duty in the Sea of Japan, the guided missile frigate returned to the Gulf of Tonkin to serve as PIRAZ vessel. She subsequently visited Hong Kong and Subic Bay (effecting rudder repairs at the latter port) and conducted one more PIRAZ tour before beginning her homeward voyage.

Departing Mayport on 19 January 1972, William H. Standley took part in Operation "Snowy Beach" before being detached on the 25th to proceed to Yorktown, Va., to take on weapons. Subsequently returning to Mayport on the 28th, the guided missile frigate departed her home port on 17 February to participate in Atlantic Fleet exercises. During the course of this cruise, she visited the port of Nassau, New Providence, Bahamas, and Port Everglades, Fla., before she returned to May-port on 9 March.

After her post-deployment in-port period, William H. Standley exercised in the Caribbean as flagship forCommander, Cruiser-Destroyer Flotilla (CruDesFlot) 6 that autumn, conducting gunnery shoots-with both guns and missiles-at drone targets under wartime conditions. During her time in Caribbean waters, the ship visited San Juan.

As the year drew to a close, the guided missile frigate prepared for her first major overhaul since commissioning. After entering the Charleston (S.C.) Naval Shipyard on 20 November 1969, William H. Standley spent the first half of 1970 in shipyard hands.

Upon completion of that period of repairs and alterations, William H. Standley conducted missile firings on the Atlantic Fleet Weapons Range and trained at Guantanamo Bay for six weeks, breaking those underway evolutions with visits to San Juan and to Port-au-Prince, Haiti. Called away from her training on 5 August, William H. Standley went to the aid of a foundering Panamanian merchantman off the northeastern tip of Hispaniola, an "exacting seamanship evolution" accomplished "very professionally."

Embarking 25 naval reservists on 20 March, William H. Standley stood out to sea on that day and operated, for the next nine days, off the eastern seaboard between Jacksonville, Fla., and Charleston, S.C. During that time, she conducted an antisubmarine warfare (ASW) exercise against Trutta (SS-421) and conducted LAMPS helicopter work-up, before she returned to her home port and remained there until 30 April.

The guided missile frigate made one more exercise and spent one more period in port before she headed out from Mayport, bound for the Mediterranean and her second tour with the 6th Fleet. Rendezvousing with TG 27.4, William H. Standley proceeded across the Atlantic. While she was en route, the guided missile frigate's LAMPS helicopter crashed at sea. Of the crew of four men, all but one were rescued. The fourth man went down with the helicopter.

Departing Rota on 9 December, William H. Standley transited the Atlantic and arrived at her new home port, Charleston, S.C., a week before Christmas of 1972. In port at Charleston between 18 December 1972 and 17 January 1973, the guided missile frigate then underwent a seven and one-half month overhaul. Following that period of repairs and alterations, William H. Standley trained locally and prepared for another Mediterranean deployment.

Departing Charleston on 14 June 1974, William H. Standley reached Rota on the 27th and, during the early part of her tour, visited the French ports of St. Tropez and Theoule, where the ship joined in celebrations commemorating the 30th anniversary of the Allied landings during World War II. She then visited the Italian port of Civitavecchia. From July to September, William H. Standley spent many days at sea due to the Greco-Turkish crisis on the island of Cyprus. She underwent a brief tender overhaul at Augusta Bay, Sicily, and followed up the repairs with a full slate of underway activities. Highlighting that period were two events: the tow of Vreeland (DE-1068) when that ship developed serious boiler trouble on 4 October; and the surveillance of Soviet warships in the eastern Mediterranean. During the latter, William H. Standley discovered a Soviet submarine and maintained sonar contact for over 49 hours, forcing the surfacing of a "Zulu"-class submarine.

For the remainder of the cruise, the guided missile frigate continued her schedule of at-sea periods interspersed with visits to Genoa and San Remo, Italy, andto Rota. Departing the last-named port on 24 November, she arrived back in Charleston on 9 December.

Following the ensuing Christmas leave period, the ship underwent repairs at the Norfolk Naval Shipyard, Portsmouth, Va., and emerged from the yard late in February 1975. On 1 July 1975, William H. Standley was redesignated as a guided missile cruiser, CG-32. As the summer wore on, the ship operated out of Guan-tanamo Bay, Roosevelt Roads, and San Juan. She subsequently sailed for the Mediterranean on 2 October 1975, leaving Charleston in her wake on that day, bound, as before, for Rota.

Taking over from Luce (DLG-7), William H. Stand-ley operated in the "middle sea" into the winter, spending Christmas at Naples. The guided missile cruiser remained in the Mediterranean into the spring before turning over her duties to Harry E. Yarnell at Gibraltar on 25 April 1976 and heading for Charleston on that day.

Between mid-February and late July 1977, William H, Standley conducted one more deployment to the 6th Fleet. After returning to Charleston on 1 August, the guided missile cruiser sailed at the end of the month to join the Pacific Fleet. Leaving Charleston behind on the last day of August, William H. Standley transited the Panama Canal on 5 and 6 September, reaching her new home port of Bremerton, Wash., on the 29th. En route, she had touched at San Diego and San Francisco, Calif., and rescued a fishing boat adrift off Santa Barbara.

William H. Standley underwent a major overhaul from the autumn of 1977 into the late summer of the following year. She then ran trials and operated locally on training evolutions out of San Diego, spending Christmas holidays in port.

As of 1979, William H. Standley remained a vital unit of the United States Pacific Fleet.


Add Your Name to the
CG-32 Crew Roster