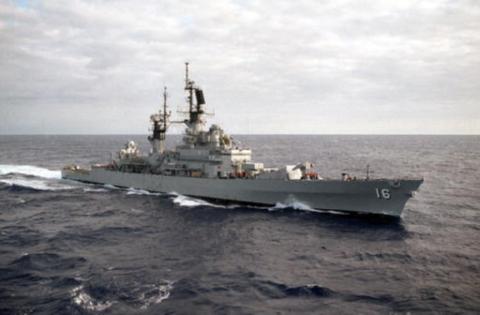 After shakedown in the Caribbean Leahy departed Boston 19 September 1963 and reported to Charleston S.C. where Rear Adm. E. E. Grimm Commander CruiserDestroyer Flotilla 6 selected her as his flagship. She then proceeded to the Jacksonville operating areas for type training and briefly put in to home port in November before returning to the Caribbean to participate in AA warfare exercises.

On 2 January 1964 the DLG was again bound for the Caribbean for missile training which ended 26 February. From 1 to 10 April she joined in an amphibious exercise "Quick Kick V " and on 1 June was permanently assigned to Destroyer Squadron 6.

Leahy departed for duty with the 6th Fleet 17 July as part of a Fast Carrier Task Group which included Forrestal (CVA-59) and participated in a coordinated fleet exercise. "MEDLANDEX-64 " between the Balearic Islands and Sardinia. She then carried out independent training in the eastern Mediterranean before departing Naples Italy 22 September to join in NATO exercise "FALLEX-64." She returned to Naples 26 October and in November participated in another fleetwide exercise "POOPDECK-IV " which brought some 40 ships of T.F. 60 together off the coast of Spain.

Leahy departed Barcelona Spain 2 December for replenishment and on 14 December drew the curtain on 32 750 miles of steaming while deployed with the 6th Fleet. She arrived Charleston 22 December and began a period of restricted availability in preparation for extensive tests to evaluate the Terrier Guidance Missile System. During these tests which were completed in September Leahy was briefly deployed in the Dominican Republic Operation. ; from 28 April to 7 May 1965 as a unit of th e Strike and Covering Force. She departed Charleston 31 November for the Mediterranean and relieved TVilliant V. Pratt (DLG-13) at Polensa Majorca 9 December. During this second deployment with the 6th Fleet she operated throughout the Mediterranean participating In ASW gunnery and AA warfare exercises as well as major fleet tactical operations supporting our NATO Allies.

Leahy returned home to Charleston on 8 April 1966. During June and July she gave some 60 midshipmen from Annapolis valuable at-sea training and visited ports along the Atlantic coast and in the Caribbean. Following this Leahy conducted exercises with the navies of many South American countries as part of operation UNITAS I'll. She sailed through the Panama Canal in early September thence south and through the Straits of Magellan at the end of October.

The operation was completed on 6 December and the DLG returned to Charleston on the 15th. Leahy then prepared for massive modernization at Philadelphia Naval Shipyard arriving there 27 January 1967 and decommissioning 18 February. For over a year she received new AAW and ASW equipment allowing her to utilize the most recent developments in the technology of naval warfare. She was placed in commission special on 4 May 1968 for the extensive period of testing her updated weapons systems. Leaving Philadelphia on 18 August she arrived at her new home port Norfolk 3 days later and continued the process of sharpening her expanded capabilities into 1 969. She is scheduled to return to a full commission status in mid-1969.


Add Your Name to the
CG-16 Crew Roster