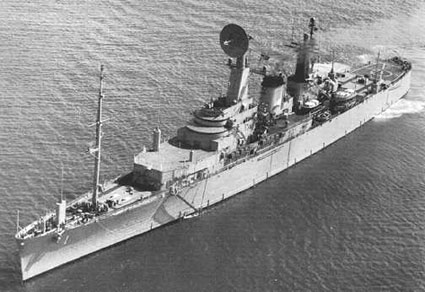 On 24 February 1956 Northampton emerged from her first overhaul at the Portsmouth Va. Naval Shipyard and after refresher training off Cuba participated as a unit of the Navy's first guided missile division afloat CruDiv 6 in the first publ ic demonstration of the Terrier missile. In April she steamed east for 6 months with the 6th Fleet and during the summer of 1957 resumed midshipmen training cruises. But between that time and 1961 she returned only infrequently to European waters. D eployed on those occasions for NATO and Fleet exercises and People to People visits the command ship was visited by high government officials of various European countries including King Baudouin of the Belgians and King Olav V of Norway.

Redesignated CC-1 on 15 April 1961 Northampton has remained in the western Atlantic until decommissioning in February 1970. Her cruises ranged from Canadian to Panamanian waters as she extensively tested and evaluated new communications equipment and played host to visiting national and international dignitaries including Presidents Kennedy and Johnson.


Add Your Name to the
CC-1 Crew Roster