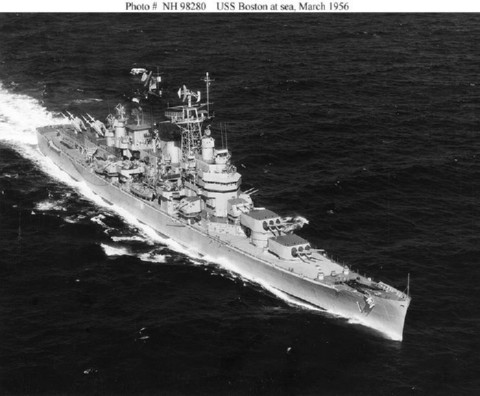 then returned to the United States for overhaul arriving at Long Beach Calif. 25 March 1945. Returning to the Western Pacific via Pearl Harbor and Eniwetok she joined TF 38 for the raids on the Japanese home islands (20 July-15 August) including the bombardment of Kamaishi Honshu (9 August). Following the Japanese surrender Boston remained in the Far East on occupation duty until 28 February 1946. She then returned to the United States and was placed out of commission in reserve at Puget Sound Naval Shipyard 12 March 1946.

was reclassified CAG-1 4 January 1952. In February 1952 she was towed from Bremerton Wash. to Philadelphia for conversion to a guided missile heavy cruiser by New York Shipbuilding Corp. Camden N. J. During conversion her after-8" turret was replaced with anti-aircraft missile launchers and she was otherwise modernized. Boston was recommissioned 1 November 1955 and operated along the east coast and in the Caribbean conducting missile evaluations and participating in fleet exercises until departing for the Mediterranean 23 November 1956. She returned in May 1957.


Add Your Name to the
CAG-1 Crew Roster