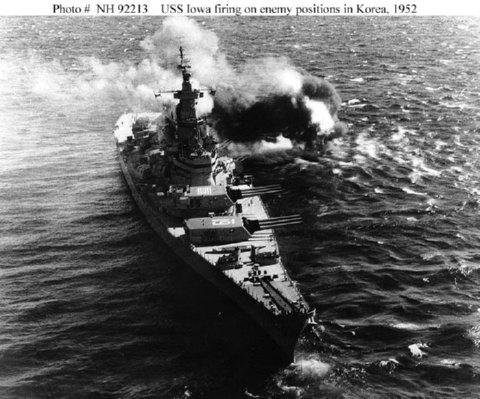 USS Iowa came into service upon her commission in February of 1943. For her first year, she patrolled Atlantic waters and conveyed President Roosevelt on his trip to Casablanca, Morocco in November of that year. Early in 1944, the ship reported to the Pacific Fleet for service. While in the Pacific, USS Iowa participated in several major campaigns including the Marshall Islands, the Marianas, the Palaus, and Leyte. She was part of the Battle of the Philippine Sea and Leyte Gulf as well. After a quick overhaul in early 1945, she went back into action at Okinawa. After the war, she served with the Pacific Fleet until her decommission in March 1949.

On 24 February Iowa put to sea for shakedown in Chesapeake Bay and along the Atlantic coast. She got underway 27 August for Argentia Newfoundland to neutralize the threat of German Battleship Tirpitz which was reportedly operating In N orwegian waters.

In the fall Iowa carried President Franklin D. Roosevelt to Casablanca French Morocco on the first leg of the journey to the Teheran Conference in November. After the conference she returned the President to the United States.

As Flagship of Battleship Division 7 Iowa departed the United States 2 January 1944 for the Pacific Theatre and her combat debut In the campaign for the Marshalls. From 29 January to 3 February she supported carrier air strikes made by Rear Ad miral Frederick C. Sherman's task group against Kwajalein and Eniwetok Atolls in the Marshall Islands. Her next assignment was to support air strikes against the Japanese Naval base at Truk Caroline Islands. Iowa in company with other ships w as detached from the support group 16 February 1944 to conduct an anti-shipping sweep around Truk to destroy enemy naval vessels escaping to the north. On 21 February she was underway with Fast Carrier Task Force 58 while it conducted the first stri kes against Saipan Tinian Rota and Guam in the Marianas.

On 18 March Iowa flying the flag of Vice Admiral Willis A. Lee Commander Battleships Pacific joined in the bombardment of Mili Atoll in the Marshall Islands. Although struck by two Japanese 4.7" projectiles during the action Iowa su ffered negligible damage. She then rejoined Task Force 58 30 March and supported air strikes against the Palau Islands and Woleai of the Carolines which continued for several days.

From 22 to 28 April 1944 Iowa supported air raids on Hollandia Aitape and Wakde Islands to support Army forces on Aitape Tanahmerah Bay and Humbolt Bay in New Guinea. She then joined the Task Force's second strike on Truk 29-30 April and bombarded Japanese facilities on Ponape in the Carolines 1 May.

In the opening phases of the Marianas campaign Iowa protected the flattops during air strikes on the islands of Saipan Tinian Guam Rota and Pagan 12 June. Iowa was then detached to bombard enemy installations on Saipan and Tinian 1 3-14 June. On 19 June in an engagement known as the Battle of the Philippine Sea Iowa as part of the battle line of Fast Carrier Task Force 58 helped repel four massive air raids launched by the Japanese Middle Fleet. This resulted in the almost complete destruction of Japanese carrier-based aircraft. Iowa then joined In the pursuit of the fleeing enemy Fleet shooting down one torpedo plane and assisting in splashing another.

Throughout July Iowa remained off the Marianas supporting air strikes on the Palaus and landings on Guam. After a month's rest Iowa sortied from Eniwetok as part of the 3d Fleet and helped support the landings on Peleliu 17 September. She then protected the carriers during air strikes against the Central Philippines to neutralize enemy air power for the long awaited invasion of the Philippines. On 10 October Iowa arrived off Okinawa for a series of air strikes on the Ryuky us and Formosa. She then supported air strikes against Luzon 18 October and continued this vital duty during General MacArthur's landing on Leyte 20 October.

In a last ditch attempt to halt the United States campaign to recapture the Philippines the Japanese Navy struck back with a three-pronged attack aimed at the destruction of American amphibious forces in Leyte Gulf. Iowa accompanied TF-38 duri ng attacks against the Japanese Central Force as it steamed through the Sibuyan Sea toward San Bernardino Strait. The reported results of these attacks and the apparent retreat of the Japanese Central Force led Admiral Halsey to believe that this for ce had been ruined as an effective fighting group. Iowa with Task Force 38 steamed after the Japanese Northern Force off Cape Engano Luzon. On 25 October 1944 when the ships of the Northern Force were almost within range of Iowa's gun s word arrived that the Japanese Central Force was attacking a group of American escort carriers off Samar. This threat to the American beachheads forced her to reverse course and steam to support the vulnerable "baby carriers." However the valiant fight put up by the escort carriers and their screen had already caused the Japanese to retire and Iowa was denied a surface action. Following the Battle for Leyte Gulf Iowa remained in the waters off the Philippines screening carriers during strikes against Luzon and Formosa. She sailed for the West Coast late in December 1944.

Iowa arrived San Francisco 15 January 1945 for overhaul. She sailed 19 March 1945 for Okinawa arriving 15 April 1945. Commencing 24 April 1945 Iowa supported carrier operations which assured American troops vital air superiority durin g their struggle for that bitterly contested Island. She then supported air strikes off southern Kyushu from 25 May to 13 June 1945. Iowa participated in strikes on the Japanese homeland 14-15 July and bombarded Muroian Hokkaido destroying steel mills and other targets. The city of Hitachi on Honshu was given the same treatment o n the night of 17-18 July 1945. Iowa continued to support fast carrier strikes until the cessation of hostilities 15 August 1945.

Arriving Seattle Wash. 15 October 1945 Iowa returned to Japanese waters in January 1946 and became flagship of the 5th Fleet. She continued this role until she sailed or the United States 25 March 1946. From that time on until September 1948 Iowa operated from West Coast ports on Naval Reserve and at sea training and drills and maneuvers with the Fleet. Iowa decommissioned 24 March 1949. After Communist aggression in Korea necessitated an expansion of the active fleet Iowa recommissioned 25 August 1951 Captain William R. Smedberg III in command. She operated off the West Coast until March 1952 when she sailed for the Far East. On 1 April 1952 Iowa became the flagship of Vice Admiral Robert T. Brisco e Commander 7th Fleet and departed Yokosuka Japan to support United Nations Forces in Korea. From 8 April to 16 October 1952 Iowa was involved in combat operations off the East Coast of Korea. Her primary mission was to aid ground troops by bombarding enemy targets at Songjin Hungnam and Kojo North Korea. During this time Admiral Briscoe was relieved as Commander 7th Fleet. Vice Admiral J. J. Clark the new commander continued to use Iowa as his flagship until 17 Octob er 1952. Iowa departed Yokosuka Japan 19 October 1952 for overhaul at Norfolk and training operations in the Caribbean Sea.

Iowa embarked midshipmen for at sea training to Northern Europe July 1953 and immediately after took part in Operation "Mariner " a major NATO exercise serving as flagship of Vice Admiral E. T. Woolfidge commanding the 2d Fleet. Upon comple tion of this exercise until the fall of 1954 Iowa operated in the Virginia Capes area. In September 1954 she became the flagship of Rear Admiral R. E. Libby Commander Battleship Cruiser Force U. S. Atlantic Fleet.

From January to April 1955 Iowa made an extended cruise to the Mediterranean as the first battleship regularly assigned to Commander 6th Fleet. Iowa departed on a midshipman training cruise 1 June 1955 and upon her return she entered Norfolk for a 4-mouth overhaul. Following refit Iowa continued intermittent training cruises and operational exercises until 4 January 1957 when she departed Norfolk for duty with the 6th Fleet in the Mediterranean. Upon completion of this d eployment Iowa embarked midshipmen for a South American training cruise and joined in the International Naval Review off Hampton Roads Va. 13 June 1957.

On 3 September 1957 Iowa sailed for Scotland for NATO Operation "Strikeback." She returned to Norfolk 28 September 1957 and departed Hampton Roads for the Philadelphia Naval Shipyard 22 October 1957. She decommissioned 24 February 1958 and e ntered the Atlantic Reserve Fleet at Philadelphia where she remains.


Add Your Name to the
BB-61 Crew Roster