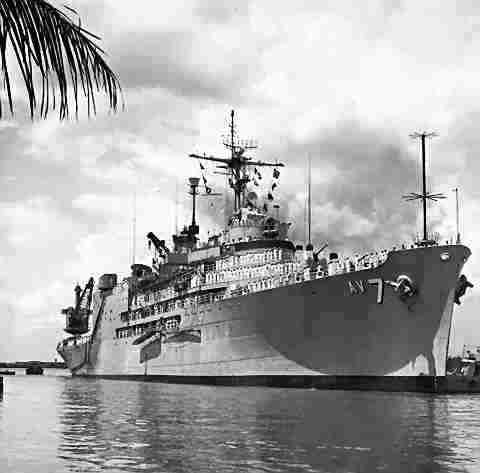 Currituck put to sea from Philadelphia 31 August 1944 bound for duty with the Pacific Fleet. At Balboa C.Z. she embarked passengers for transportation to Manus then continued on to Mios Woendi to unload cargo. She carried men and airplane spare parts and supplies for Tangier (AV-8) from Manus to Morotai then returned to Mios Woendi briefly before arriving in San Pedro Bay Leyte 6 November to begin tending seaplanes flying missions in the Leyte operations.

Currituck sailed from Leyte 6 January 1946 for the initial landings at Lingayen Gulf Luzon three days later and remained there at Cabalitan Bay and at Mindoro tending seaplanes and directing seaplane search operations. She returned to Leyte 6 February then sailed for Manila on 3 March. Upon her arrival three days later she sent boarding parties to inspect abandoned Japanese vessels in the harbor. Her tender duties at this port included maintenance of the 76th Wing of the Royal Australian Air Force from 27 April to 6 May.

Departing Manila 10 June 1946 Currituck maintained a base for seaplanes conducting night searches from Lingayen Gulf between 11 June and 20 August then returned to Manila 24 August. She sailed for Okinawa on 30 August.

Currituck remained in the Far East in support of the reoccupation of the Chinese mainland tending seaplanes at Jinsen Korea and Shanghai Tsingtao and Taku China returning to Okinawa 28 October. She got underway for the United States on 9 December and arrived at San Francisco 30 December. After local operations from this port and San Diego she sailed 2 December 1946 touched at the Marquesas Islands and visited Sydney Australia from 13 to 20 March 1947. She returned by way of the Panama Canal to Norfolk Va. arriving 18 April. Currituck was placed out of commission in reserve 7 August 1947 berthed at Philadelphia.

Recommissioned 1 August 1951 Currituck got underway 17 December for Norfolk. From this port she operated locally and in the Caribbean primarily on training duty. She departed Norfolk 23 August 1952 for a cruise which included visits to Thoneim Norway and Leith Scotland returning to her home port 17 October. After local operations and a brief voyage to Bermuda she sailed again from Norfolk 24 August 1953 passing through the Panama Canal for operations around the Galapagos Islands and returning to Norfolk 25 September. On 6 July 1954 she cleared for a European cruise calling at Milford Haven England continuing to Taranto Italy and touching again at Milford Haven and Portsmouth before returning to Norfolk 18 September.

Between 26 August and 13 December 1956 Currituck served with the 6th Fleet in the Mediterranean returning to training cruises to the Caribbean and local operations at Norfolk until 9 January 1958 when she entered the Philadelphia Naval Shipyard. She was decommissioned there 12 February 1958 for thorough modernization and was recommissioned 20 August 1960. After shakedown and training on the east coast and in the Caribbean Currituck arrived at her new home port of San Diego on 3 Decemher 1960 and remained there for the duration of the year.


Add Your Name to the
AV-7 Crew Roster