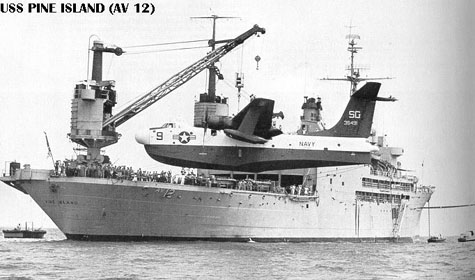 Departing California 16 June 1945 Pine Island (AV-12) steamed to Okinawa. There she tended seaplanes engaged in air-sea rescue operations during the final phases of World War II. At the end of the war she entered Tokyo Bay and contributed seaplane flight operations to the occupation of Japan in 1945. Following occupation duty in Japan she conducted seaplane flight operations in the Whangpoo River near Shanghai China. She left the Pacific in 1946 and steamed via the Suez Canal to Norfolk Va.

Departing Norfolk in December she arrived in the Antarctic area in January 1947. She contributed to the aerial exploration of Antarctica in Operation Highjump and saved several downed aviators from the hostile climate. Departing the Antarctic in March she traveled from Rio de Janeiro via the Panama Canal to San Diego arriving in April.

Leaving California for the Far East in August 1947 she spent the winter at Tsingtao China and the summer of 1948 in the Northern Pacific. Awaiting a major overhaul in 1949 she decommissioned 1 May 1950.

Recommissioned 7 October 1950 at Alameda Calif. in response to the Korean War she departed for the Western Pacific in December. She tended seaplanes that flew missions over enemy-held territory in Korea before returning to San Diego in September 1951. She was away from California on WestPac deployments January to September 1952 February to September 1953 January to August 1954 and February to August 1955. Deployed to WestPac in June 1956 she visited Brunei Borneo in August before returning to San Diego in December. From April to December 1957 she operated in WestPac.

Sailing for WestPac in May 1958 she visited Bangkok Thailand and was at Kaohsiung Taiwan during Communist bombardment of Quemoy and Matsu. She returned to San Diego in December and departed for WestPac in June 1959. During 1960 and 1961 she continued her Pacific duties.

Deployed to WestPac from January to June 1962 she embarked news media personnel from several countries in March in connection with the SEATO exercise "Tulungan." Steaming for WestPac in March 1963 she operated out of Okinawa received visitors at Chinhae Korea in June and delivered fresh water to Hong Kong in August before returning to San Diego in September. In January 1964 she departed San Diego for the Galapagos Islands where she provided assistance to scientists before returning to San Diego in February.

Deployed to WestPac in June 1964 she served at Da Nang South Vietnam in August. In September 1965 she returned to WestPac conducted seaplane operations in Cam Ranh Bay South Vietnam and participated in the 1966 Coral Sea anniversary festivities in Australia and New Zealand before returning to San Diego in June.


Add Your Name to the
AV-12 Crew Roster