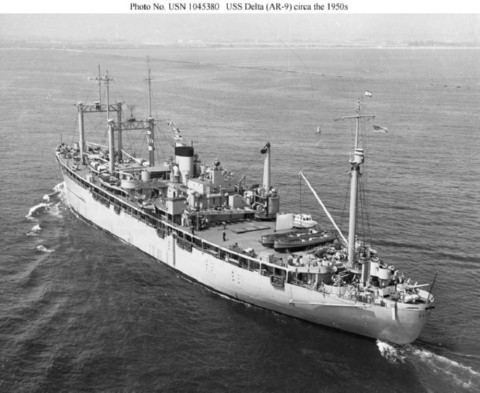 From 8 July 1941 to May 1942 Delta carried cargo from east coast ports to Guantanamo Bay, Cuba; Puerto Rico; Bermuda; Argentina, Newfoundland; Halifax, Nova Scotia; and Reykjavik, Iceland. On 1 July 1942 she was reclassified AR-9, and was placed in reserve commission for conversion to a fleet repair ship by Cramp Shipyard, Philadelphia, Pa.

Delta sailed from Philadelphia 3 March 1943, and between March and June repaired amphibious ships and craft at Oran, Algeria. She served similarly at Bizerte, Tunisia, from June to March 1944, then at Palermo, and on 8 July sailed for Pozzuouli, Italy, to prepare landing craft for their return to the United States. Her final Mediterranean duty, from November to April 1945, was to tend destroyers at Oran.

She returned to Norfolk for overhaul 27 April 1945, and on 15 June sailed for Pearl Harbor for a month of repair duty. On 26 August, she arrived at Yokosuka Naval Base for general fleet repair work, including the assignment of preparing Nagato, the former Japanese battleship,' for the atomic weapons tests of 1946 at Bikini. Delta served the Fleet at Shanghai from March through June 1946, and on 17 July arrived at Philadelphia, where she was decommissioned and placed in reserve 5 March 1947.

Recommissioned 1 November 1950, Delta arrived at San Diego 8 March 1951 to provide repair services to ships of the Pacific Fleet there and at Long Beach as well as on periodic deployments to the Far East. Her first such, during the Korean War, was from 25 June 1952 until 14 February 1953. On her second, in 1953 and 1954, she joined in Operation "Passage to Freedom," the evacuation of Vietnamese to South Vietnam upon the partition of Indochina. During her last FarEastern service, in 1955, she served as flagship for the Blockading and Escort Force off Korea. She returned from this cruise to Tacoma, Wash., where she was decommissioned and placed in reserve 1 December 1955.


Add Your Name to the
AR-9 Crew Roster