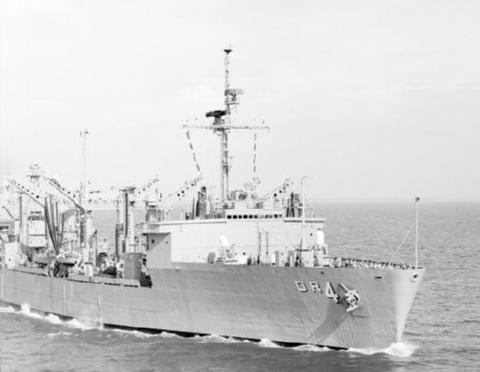 The USS SAVANNAH (AOR-4), a Wichita-class replenishment oiler, was commissioned on 5 DEC 1970. USS SAVANNAH operated out of Norfolk, VA after commissioning. Deploying to Mediterranean once and then was reassigned to the Pacific due to the need for her services caused by the war in Vietnam. After fueling the "line" for five months, she returned to Norfolk in June 1974. SAVANNAH assumed her regular "watches" in the Atlantic and Mediterranean. For the next twenty years SAVANNAH fueled the Fleet, true to her motto, "WE SERVE WITH PRIDE". USS SAVANNAH served her country for 24 years, 7 months and 23 days, until decommissioned on 28 JUL 1995. SAVANNAH was scrapped in 2009 and her dismantling was detailed in a National Geographic Channel television show titled "Break It Down".

Final Disposition: Transferred to the Maritime Administration for disposal

Following shakedown out of Guantanamo Bay, Savannah proceeded to her homeport, Norfolk. Arriving on 12 May, she completed post-shakedown availability on 9 August, and prepared for deployment to the Mediterranean.

Savannah departed Norfolk on 20 September. En route to Rota, Spain, she refueled ships participating in a Caribbean exercise. After reporting to the 6Łh Fleet on 8 October, Savannah operated in Task Group 60.1; and, by the end of the year, she had replenished 178 ships.

Savannah continued to operate with the 6th Fleet in the Mediterranean until early March 1972. On 9 March, she headed west for Norfolk and arrived there eight days later. Her stay in the United States, however, was cut short by the exigencies of the Vietnam War. On 25 April, she exited the Chesapeake Bay and, four days later, transited the Panama Canal. Savannah arrived in Subic Bay, P.I., on 20 May and began a five-month tour replenishing the fleet along the coast of Vietnam. She made six line swings to the Gulf of Tonkin during this time. Each swing was punctuated by a 4-6 day load out period in Subic Bay.

Savannah departed Subic Bay on 5 November, bound for Norfolk. She transited the Panama Canal on 4 December and arrived at Norfolk on the 8th. Savannah operated out of Norfolk, along the Atlantic seaboard and in the Caribbean, for almost all of 1973. On 3 December 1973, she again headed eastward to join the 6th Fleet in the Mediterranean. From 12 December until late May 1974, she supported units of the 6th Fleet on-station in the Mediterranean. On 3 June 1974, she re-entered Norfolk and, as of mid-June, remains in port there.

Savannah earned one battle star and a Meritorious Unit Commendation for service in the Vietnam War.


Add Your Name to the
AOR-4 Crew Roster