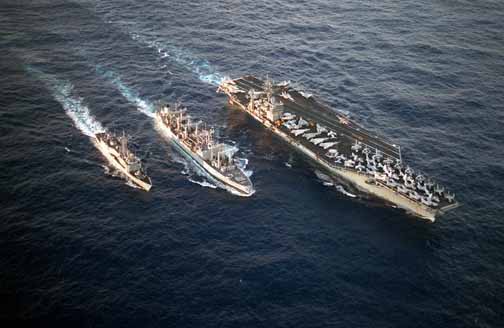 The USS CALOOSAHATCHEE (AO-98), a Cimarron-class oiler, was commissioned on 10 OCT 1945. She served the Atlantic Fleet, performing underway refueling of bunker oil and avgas. CALOOSAHATCHEE's voayages took her north to Iceland, south of the Equator and as far east as the Indian Ocean. During her nearly 45 years at sea, she refueled thousands of Navy vessels, always with "SERVICE TO THE FLEET WITH PRIDE", USS CHATTAHOOCHEE served her country for 44 years, 4 months and 18 days, until decommissioned on 28 FEB 1990. The hulk of the CALOOSAHATCHEE was dismantled by UK ABLE in Teeside, England in 2003.

Named for: The Caloosahatchie River in Florida

Caloosahatchee cruised off the east coast transporting oil and fueling ships at sea and made a voyage to Iceland from Norfolk during her first two years of operations. On 14 August 1947 she sailed for her first tour of duty with the 6th Fleet in the Mediterranean a deployment that marked almost every year of her operations from that time into 1960. In this era when the U.S. Navy had perfected at-sea replenishment to greatly increase mobility flexibility and efficiency Caloosahatchee played a key role in increasing the enormous power for peace represented by the mighty 6th Fleet. Among other widespread operations Caloosahatchee participated in NATO Operation "Mariner" off Greenock Scotland from 16 September to 20 October 1953 and provided summer training for future naval officers in midshipman cruises to Le Havre France in 1954 and to Copenhagen Denmark in 1956. In fall 1957 and again in summer 1958 the oiler sailed with forces calling at ports in England Scotland France and Portugal.

Caloosahatchee 's constant readiness for emergency deployments or other challenges to her operational capability was developed and maintained through training operations along: the east coast and participation in such large-scale Atlantic Fleet exercises as Operation "Springboard" held in the Caribbean which operations continued through 1960.


Add Your Name to the
AO-98 Crew Roster