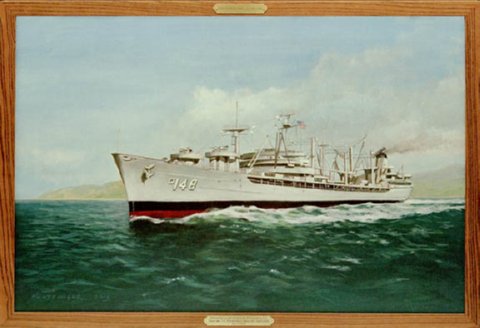 After fitting out at Philadelphia, Ponchatoula, the sixth of a class designed to combine speed and large cargo capacity for rapid underway replenishment over extended operational periods, got underway for the Pacific. Arriving at Long Beach 10 March, she underwent shakedown and training exercises off the California coast and in September deployed to the Far East. Enroute she assisted SS Venus, a Panamanian merchantman lying helpless on the fringes of two typhoons. Taking Venus in tow on the 26th, Ponchatoula was relieved of her tow on the 28th, and continued on to Sasebo to join the 7th Fleet.

Rotated regularly to the western Pacific since that time, Ponchatoula was homeported at Pearl Harbor in early 1958 and received her introduction to support under hostile conditions while operating with 7th Fleet units during the Quemoy-Matsu Crisis in the fall of that year. Support for experimental operations highlighted 1962 as she provided POL services to Joint Task Force 8 engaged in operation Dominic the Christmas Island nuclear test series, then operated Project Mercury recovery ships during the Sigma splashdown. Repeating that support with Faith Seven 1963, she shifted to combat operations in October 1964 deployed to the South China Sea to refuel ships employ the coast of Viet Nam. 279 refuelings later, she returned to Hawaiian waters. In June 1965 she participated in recovery operations for Gemini Four, then deployed again to Viet Nam. In December she interrupted operations there to support the recovery ships for Gemini Six and Seven and in April 1966 returned to Hawaii having set a new record in the Pacific Fleet by bringing 503 ships alongside, 464 of which she refueled. Deployed to WestPac again in November 1967, she pumped over 74 million gallons of fuel through her hoses before returning home in June 1968. In October she again joined ships in the Pacific splashdown area, this time to recover Apollo 7, the first U.S. three-man flight.

By 8 December, Ponchatoula was back in the Philippines, whence she got underway for Yankee Station in Tonkin Gulf on the 15th to again replenish ships operating in support of Allied operations in Viet Nam. In July 1969, she returned home and into 1970 remains in Hawaiian waters.


Add Your Name to the
AO-148 Crew Roster