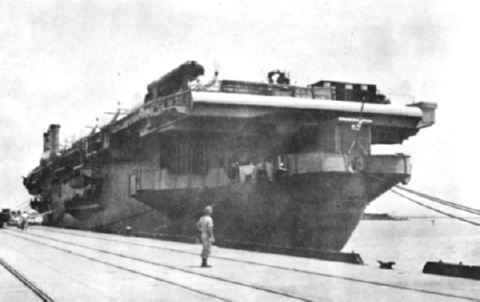 USS Croatan (AKV-43) was a Bogue-class escort aircraft carrier built by Seattle-Tacoma Shipbuilding Corp and commissioned April 23, 1943. She played an essential role in North Atlantic antisubmarine operations during World War II, supporting a hunter-killer groups that sunk a total of six German U-boats during the two years she was most active.

This carrier also made a couple trips from the west coast of the United States to Casablanca, Morocco, transporting aircraft and personnel. She participated in antisubmarine trainings in Bermuda and Guantanamo Bay and was based largely at Norfolk, where she was also overhauled between operations.

Most Important Operations Include:

After the war ended, USS Croatan ferried home military personnel from Europe. She operated with the MSTS, operated by civilians, until 1961 and was later sold for scrap.


Add Your Name to the
AKV-43 Crew Roster