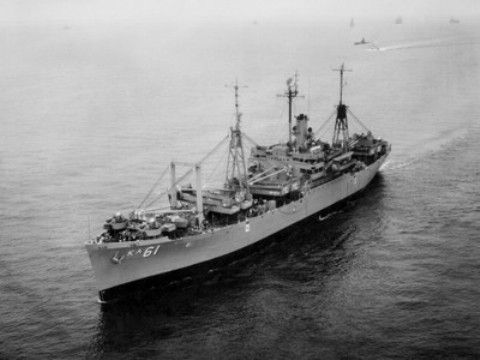 Following shakedown in Chesapeake Bay Muliphen sailed 1 December 194.4 to operate with the Key West Fla. Sound School. On 14 December she steamed for the Pacific where she joined Transport Division 43 off Pearl Harbor and sailed to prepare for the invasion of Iwo Jima at Eniwetok arriving 5 February 1945. Muliphen arrived off Iwo Jima 19 February unloaded until 4 March then retired to Saipan.

She departed 27 March for the invasion of Okinawa took part in a feint landing 1 April and repeated the feint the following day. Held in reserve off Okinawa until 10 April she sailed then for Saipan and cargo duty between the Marianas and Solomons. She arrived Manila 18 September with a cargo of underwater demolition gear and spent the next 3 months carrying occupation troops to Japan from the Philippines until sailing for Seattle 24 November.

Serving with the Naval Transportation Service for the next 4 years she carried men and supplies to Asiatic and Pacific ports and supplied Point Barrow Alaska in 1946 and 1947.

In 1950 Muliphen transferred to the Atlantic Fleet Amphibious Fleet Amphibious Force based at Norfolk The following decade she rotated in a steady schedule of Caribbean and Mediterranean deployments. She participated in the amphibious landings at Beirut Lebanon when a

prompt response by the 6th Fleet prevented Communist subversion of Lebanon's government. Continuing similar duty in the 1960's she also took part in NATO exercises and the training of Naval Academy midshipmen. Muliphen continues into 1969 to perform a vital role In the Nation's peacekeeping efforts.


Add Your Name to the
AKA-61 Crew Roster