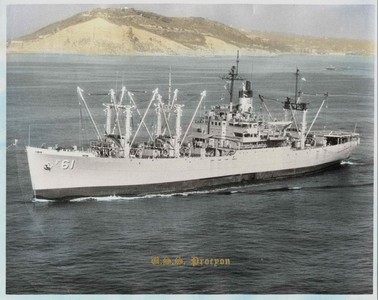 Rankin (AKA-103) an attack cargo ship was laid down on 31 October 1944 as MC hull 1702 by North Carolina Shipbuilding Co. Wilmington N. C. Launched 22 December 1944 acquired by the Navy 25 January 1945 ferried to the Charleston Navy Yard for conversion to an AKA and commissioned 25 February 1945 Lt. Comdr. Thomas D. Price in command.

Following an Atlantic shakedown Rankin steamed 26 March 1945 in company with Tolberg (APD-103) for the Canal Zone. Joining the Pacific Fleet 1 April she loaded Marine Corps replacement equipment at San Francisco and steamed independently for Hawaii 17 April. Intensive training in shipboard procedures and amphibious techniques followed. She then took on 5 000 tons of Army ammunition at Honolulu and in company with Tolovana (AO-64) steamed on 25 May for Ulithi. Escorted by Enright (APD-66) the two ships immediately went on to deliver their vital cargoes at Okinawa. All ammunition was discharged between air raids.

Rankin departed Okinawa 28 June in convoy for Saipan. There she offloaded her boat group and then steamed independently for San Francisco arriving 20 July. After taking on her allowance of landing craft she put in at Seattle Wash. for repairs.

Hostilities ended during loading operations her ammunition was discharged and the ship sailed for the Philippines arriving Manila on 9 September.

Assigned to TransRon 20 Rankin steamed for Lingayen Gulf. En route she touched at Subic Bay contributed landing craft to the boat pool there and then commenced taking on equipment of the 25th Army Division from the San Fabian beaches.

The squadron got underway for Japan 1 October. After riding at anchor for nearly 3 weeks while the approaches to Nagoya southern Honshu were cleared of mines the squadron entered that port 27 October. Rankin embarked Navy personnel there took on inoperable landing craft at Samar P.I.and sailed for home arriving San Francisco 25 November.

Rankin decommissioned 21 May 1947 at San Francisco and entered the Pacific Reserve Fleet. She recommissioned 22 March 1952 at the Todd Shipyard Alameda Calif.; and following shakedown transited the Panama Canal to join the Amphibious Force Atlantic Fleet. Operating out of Norfolk she commenced a lengthy second career of support for amphibious training operations along the east coast as well as in the Caribbean and Mediterranean seas

On 18 July 1958 Rankin was part of the amphibious force which landed 5 000 U.S. Marines at Beirut Lebanon in response to a request from the Lebanese Government for assistance in averting civil war.

Since 1959 Rankin has deployed periodically to the Caribbean with Amphibious Squadron 10 a fast amphibious squadron with vertical envelopment capabilities. Operating regularly in the Caribbean she has repeatedly called at Puerto Rico the Virgin Islands Haiti Jamaica and Cuba. During the crisis of October and November 1962 occasioned by the discovery of Russian intermediate-range ballistic missiles in Cuba Rankin operated in the force which was marshalled in Cuban waters prepared for any eventuality.

In January 1963 Rankin departed Norfolk with PhibRon 10 and various components of the 2d Marine Battalion. In late February she visited Santo Domingo Dominican Republie in company with Boxer (LPH-4) for the inauguration of President Juan Bosch. From April through June she again deployed for training operations and a yard period at Norfolk Naval Shipyard.

Refresher training at Guantanamo Bay followed early in January 1964. Rankin next participated in exercise "Steel Pike I" off the Spanish coast 28 September through 3 December. Upon returning to Norfolk she underwent a tender availability with Amphion (AR-13) after which she resumed coastal training and readiness operations and deployments with the Caribbean Amphibious Ready Squadron.

Effective 1 January 1969 Rankin was reclassified LKA-103. In late July she took on Marines and equipment and deployed to the Mediterranean returning to Norfolk 13 December. The new year 1970 brought with it a period of operations off the eastern seaboard and another July-to-December deployment with the Sixth Fleet. Rankin returned to Little Creek Va. for the last time 14 December 1971.

After five months of preparation Rankin was decommissioned 11 May 1971 at Little Creek Va.


Add Your Name to the
AKA-103 Crew Roster