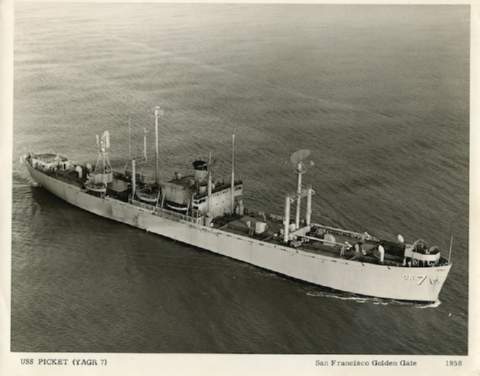 Acquired by the Navy 12 July 1955, and renamed Picket, the merchant ship was towed to the Navy Yard, Portsmouth, Va., for conversion to radar station ship YAGR-7. She commissioned 8 February 1956, and was reclassified AGR-7 on 28 September 1958.

From 1956 to 1965, Picket used her long range radar and communications equipment to serve the North American Air Defense Command. She provided vital radar information on seaward air approaches to the Pacific coast. She spent more than half of 1964 at sea, on various stations 500 to 600 miles off the west coast of the U.S. and Canada. Her sea tours usually included 30 to 35 days at sea, followed by 15 to 30 days in San Francisco between patrols.


Add Your Name to the
AGR-7 Crew Roster