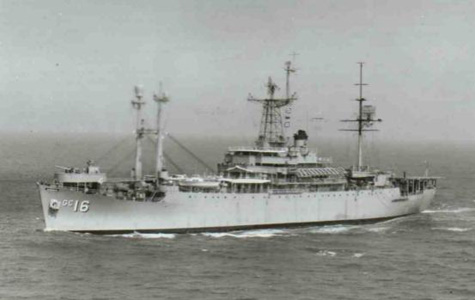 
Pocono (AGC-16), an amphibious force flagship, was laid down 30 November 1944 and launched 25 January 1945 by the North Carolina Shipbuilding Co., Wilmington, N. C., sponsored by Miss Mary V. Carmines of Messick, acquired by the Navy 15 February 1945; towed to Boston for fitting out; and commissioned 29 December 1945, Captain H. A. Sailor in command.

Pocono departed Boston 18 March 1946 for Key West, Fla en route to Guantanamo Bay for shakedown. The ship the. proceeded to Washington, D.C., via Norfolk, and arrived in the nation's capital 7 May.

During the next few years, she operated off the Atlantic coast from Newfoundland to Trinidad. Early in 1948, she was flagship of Admiral W. H. P. Blandy, Commander Atlantic Fleet.

Pocono decommissioned at Norfolk 19 June 1949 and moved to Bayonne, N.J., where she entered the Atlantic Reserve Fleet.

Pocono recommissioned 18 August 1951 to serve as flagship for Commander, Amphibious Force, Atlantic Fleet. She operated in this capacity in the Caribbean and off the East Coast of the U.S. until 1956.

On 31 October 1956, during the Suez Crisis, the Commander-in-Chief, Naval Forces, Eastern Atlantic and Mediterranean, embarked in Pocono, and remained on board until 13 December.

In September 1957 Pocono served as flagship for a 38-ship amphibious task force in NATO exercise Deepwater off the coast of Turkey.

In early 1958 Pocono served as flagship for operation Packard X, an Atlantic Fleet amphibious exercise at Onslow Beach, N.C. On 23 June 1958 she departed the U.S. bound for the Mediterranean. She was diverted to Beirut, Lebanon, where she controlled the landing that assisted that nation. During her three month stay in Beirut, she performed such functions as air control and command communications. Because of the Beirut Crisis the regular six-month Mediterranean deployment was extended to nine months, with Pocono returning to Norfolk 20 March 1959.

On 11 April 1961 she departed for the Mediterranean, and participated in several amphibious landings, including a joint NATO landing at Saros Gulf, Turkey, before returning to Norfolk 12 October.

After an extensive overhaul she departed 10 April 1962 for the Caribbean, and 23 July for the Mediterranean. When the Cuban Crisis arose, Pocono was recalled to the United States. She carried the flag of Commander, Amphibious Forces, Atlantic, and remained in operational readiness in Norfolk.

For the rest of 1962, 1963, and through most of 1964 Pocono remained in the U.S. In early 1964 she participated in two landing exercises at Onslow Beach, N.C. On 11 October she deployed for Steelpike I, which included an assault with helicopter landings at Huelva Bay, Spain. She returned to Norfolk 25 November.

Pocono departed Norfolk 21 May 1965 enroute to Santo Domingo, Dominican Republic to aid in the peace-keeping operation there. She provided the platform from which Vice Admiral McCain directed the naval forces' support of this operation.

From late 1965 through early 1968 Pocono participated in further operations in the Caribbean and off the east coast of the U.S., returning to Norfolk 24 February 1968.


Add Your Name to the
AGC-16 Crew Roster