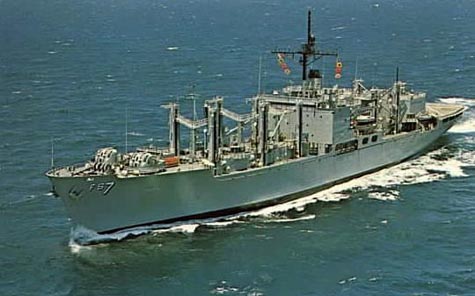 The USS SAN JOSE (AFS-7), a Mars class combat stores ship, was commissioned on 23 OCT 1970. USS SAN JOSE served her country for 23 years and 10 days, until decommissioned on 2 NOV 1993. The last of the Mars class, USS SAN JOSE was initially home ported at Alameda, California after post commissioning shake down and qualifications. She began her service to the Pacific Fleet with a series of West Pac deployments to replenish US Naval units off the coast of Vietnam. As the US Navy's Pacific structure changed after Vietnam and Iranian Hostage Crisis highlighted the need for a continuing need for a US Naval force in the Indian Ocean, SAN JOSE's home port was shifted westward to Apra Harbor, Guam. From Guam, she supported the naval effort during the First Gulf War. She was decommissioned in November 1993 and transferred the Military Sealift Command, was redesignated USNS San Jose (T-AFS-7) and "crewed" by civilians under US Navy leadership. Retired by the MSC in early 2010, she is scheduled to be scrapped.

Following commissioning and fitting out, San Jose, the first combat stores ship of the Pacific Fleet Service Force to receive the U-1500 computer system, conducted training drills; made a short cruise to Acapulco out of San Diego; and carried out ship's qualification trials out of Long Beach before steaming to her home port, Alameda, in February 1971. Arriving on the 10th, she took on her first PACFILL (Pacific Fleet Issue Load List) stock, and, in March, completed final contract trials. Shakedown and availability followed. In July, she moved north to British Columbia to participate in the observance of that province's Centennial. August took her to Seattle. On 10 September, she received two UH-46 helicopters from detachment HC-3; and, on the 11th, she departed Alameda for her first WestPac deployment.

The stores ship arrived at Subic Bay, Philippines, on 27 September; topped off her load; and, on 4 October, departed for the Tonkin Gulf and her first line swing. On 6 October, she conducted her first simultaneous vertical replenishment and, on the 7th, her first underway replenishment of a carrier task group. From the Tonkin Gulf, Sam Jose delivered freight at Danang, Cam Ranh Bay, and Vung Tau; then conducted underway replenishments off the southern coast of South Vietnam before moving on to a port visit at Singapore, whence she headed back to the Philippines to take on more cargo.

San Jose returned to Subic Bay on 23 October and, by the end of November, had completed three more line swings. On 10 December, she completed her fifth line swing, and, at mid-month, commenced her sixth. The deployment to the western Pacific ended on 16 March 1972, when she departed Subic Bay to return to the United States. Proceeding via Apra, Guam, and Pearl Harbor, Hawaii, she arrived in San Diego at the end of the month.

San Jose resumed local operations out of San Diego until redeploying to the 7th Fleet in late August. She arrived in Subic Bay on 12 September and, after nine months supporting the 7th Fleet in the Far East, departed Sasebo, Japan, on 11 June 1973 to return to the United States. She arrived at San Francisco on the 22d and resumed local operations. Through June 1974, San Jose continues to cruise the western coastline of the United States, based at San Francisco.


Add Your Name to the
AFS-7 Crew Roster