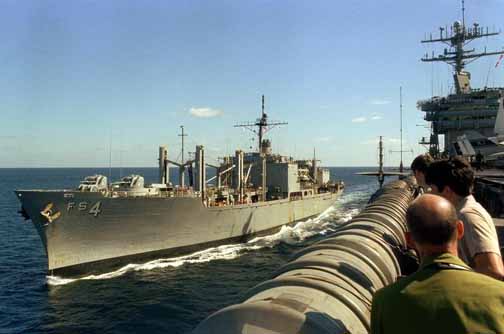 
The second White Plains (AFS-4) was laid down on 2 October 1965 by the National Steel & Shipbuilding Co. at San Diego, Calif.; launched on 26 July 1966; sponsored by Mrs. Bob Wilson; and commissioned at the Long Beach Naval Shipyard on 23 November 1968, Capt. Thomas B. Brenner in command.

The combat stores ship spent the first nine months of her commissioned service engaged in a series of routine post-commissioning activities in California waters. In February 1969, she went through a series of qualification trials in preparation for her final contract trials which she passed successfully in mid-March. Shakedown training followed in April, and post-shakedown availability at the San Francisco Bay Naval Shipyard occupied her time during the last half of May and the first three weeks of June. During the second week in July, the ship participated in her first fleet exercise, Operation "Beagle Baron." She spent the last half of the month making preparations for her first deployment to the western Pacific. On 20 August, White Plains stood out of San Francisco Bay and shaped a course for the Far East. On 3 September, she reached her first port of call in the Orient, Yokosuka. While in Japan, she also visited Sasebo before getting underway on 16 September for Subic Bay and thence to the Vietnam combat zone. After topping off her replenishment cargo at Subic Bay, the ship arrived in Vietnamese waters on 23 September. There, she cruised for 14 days engaged in underway replenishment opera-tons with warships of the 7th Fleet on station off the coast. The deployment lasted for another four months during which she made three more replenishment cruises in the combat zone along the Vietnamese coast. On 11 February 1970, White Plains departed Subic Bay on her way home. She stopped at Pearl Harbor near the end of the month and arrived in San Francisco on 5 March.

The combat stores ship remained in the United States only three months. During that time, she took the normal post-deployment standdown break, underwent a restricted availability, and conducted refresher and type training. On 10 July, she headed back to the western Pacific for her second tour of duty in the Vietnam conflict. She reported for duty with the 7th Fleet on 22 July and, between that time and early December, made five different replenishment cruises in the combat zone. On 8 December, the ship departed Yokosuka, Japan, to return to the United States. She arrived back in San Francisco on 18 December and immediately commenced post-deployment standdown. On 15 April 1971, she began her first regular overhaul at Hunters Point Naval Shipyard, and it occupied her until 8 July when she put to sea for post-overhaul trials. Type and refresher training took up the remainder of July as well as August and September. In October, she began preparations for her third deployment to the western Pacific.

On 20 November, White Plains stood out of San Francisco Bay on her way to the Far East and, after a two-week voyage, arrived in Subic Bay on 7 December. Again, she made a series of replenishment cruises in the Vietnam combat zone and punctuated them with visits to such ports as Hong Kong; Singapore; Sattahip, Thailand; Kaohsiung, Taiwan; and Subic Bay. She remained in the Far East for over seven months and conducted 10 replenishment cruises to Vietnamese waters. On 8 July 1972, White Plains departed Sasebo, Japan, and shaped a course for home. She arrived at Oakland, Calif., on 19 July and remained there until 5 September at which time she moved to Alameda for a restricted availability at the Todd Shipyard. The ship completed repairs on 3 October and began preparations to return to the western Pacific. On 31 October, the combat stores ship got underway from Alameda and set a westerly course. After a two-week voyage, she entered her new home port, Sasebo, on 13 November. There, she immediately began another restricted availability, this time for conversion of her propulsion system to the use of Navy distillate fuel. That conversion took up the remainder of 1972 and the first 15 days of 1973.

White Plains' return to duty coincided with the end of American involvement in the Vietnam war; however, that did not signal an end to duty in Vietnamese waters. Through the first seven months of 1973, she continued to make replenishment cruises in the former combat zone to bring stores to the American ships engaged in Operation "End Sweep," the taking up of mines planted by the Navy in North Vietnamese waters during the war. "End Sweep" came to a conclusion late in July, and White Plains began real peacetime duty at that point. For the next two years, she operated out of Sasebo making periodic voyages to provide supplies to units of the Fleet at sea. She also made the usual port calls throughout the Orient and participated in training exercises, notably with units of the Republic of Korea Navy in November of 1974 and January of 1975. On 1 August 1975, she changed home ports from Sasebo to Yokosuka and, on 5 September, began regular overhaul at her new base of operations. That repair period lasted until 15 April 1976 at which time she resumed her replenishment duty with the 7th Fleet.

The year 1976 proved a very active one for White Plains. In addition to her normal duty supplying the 7th Fleet, she joined in three non-routine operations. Late in May and early in June, she voyaged to the Mariana Islands where Typhoon Pamela had just wreaked so much havoc. The ship carried supplies to the relief of the storm-battered island of Guam. During the second week of July, she interrupted her normal routine again, this time to rush to the Indian Ocean, via Subic Bay, to resupply the carrier contingency force sent to patrol the eastern coast of Africa during the flare-up between Kenya and Uganda. She remained in the Indian Ocean until 5 August whereupon she headed back to Yokosuka to resume her normal support duties with the 7th Fleet. On 27 September, she departed Yokosuka for another special mission. During the next five weeks, she sailed to Australia, participated in the bilateral amphibious and antisubmarine exercise Operation "Kangaroo II," visited the Australian port of Townsville, and then returned to Yokosuka. She arrived back in her home port on 11 November and resumed her duties keeping the fleet supplied. Since that time, White Plains has continued to make replenishment swings from Yokosuka to 7th Fleet units operating in such diverse places as the Philippine Sea, the South China Sea, and the Sea of Japan. In late October and early November of 1977, the ship voyaged to the Indian Ocean again to replenish American warships engaged in Operation "Midlink." Upon concluding that mission, she returned to Yokosuka and resumed her replenishment duties out of that port. As of January 1979, she continued to operate from Yokosuka in support of the 7th Fleet.


Add Your Name to the
AFS-4 Crew Roster