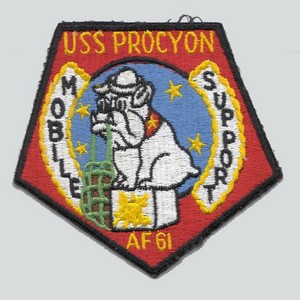 After shakedown, Procyon engaged in the testing of Fast at Sea Transfer equipment (FAST) with other replenishment ships of the Pacific Fleet, before deploying to the Western Pacific 2 June 1962. She remained in and around Sasebo, Japan for three months, returning to the U.S. 26 September. She made her second WestPac deployment in support of 7th Fleet carrier task groups 23 February 1963, returning 7 July to conduct Fleet exercises and night replenishment operations until 6 October. Procyon was ordered back to WestPac in late October, returning 7 March 1964 for coastal operations. She was employed in the Gulf of Tonkin with the 7th Fleet (1 August-7 December) during the Vietnam crises.

Procyon has since operated in support of the 7th Fleet, in the struggle against communist aggression in Southeast Asia, off the coast of Vietnam, returning periodically to the U.S. for rest, upkeep and training. She provides logistic support to Task Force 77 units on Yankee Station, as well as to Market Time Patrol craft along the coast and harbor facilities from Da Nang to Vung Tau. Into 1970, Procyon continues a vital service to the U.S. Pacific Fleet.


Add Your Name to the
AF-61 Crew Roster