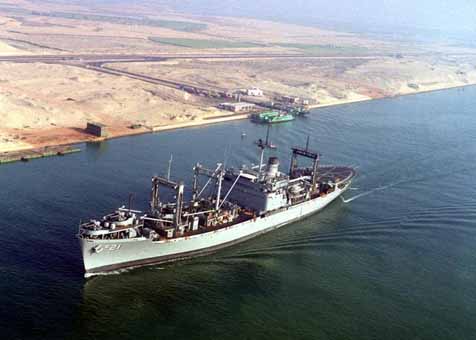 The USS SURIBACHI (AE-21), a Suribachi-class ammunition ship, was commissioned on 17 NOV 1956. Built by Bethlehem Steel's Sparrows Point Shipyard outside of Baltimore, USS SURIBACHI served with the Atlantic Fleet for nearly all of her entire service career. SIRIBACHI deployed numerous times to the "MED", "Carib" and "IO". USS SURIBACHI made a Western Pacific - Vietnam deployment in 1972-73. USS SURIBACHI served her country for 38 years and 15 days, until decommissioned on 2 DEC 1994. SIRIBACHI was laid up at the NISMF - Ft. Eustis, Va for fifteen years until sold for scrapping in 2009.

Between commissioning and August of 1957 Suribachi completed fitting out and conducted shakedown training out of Guantanamo Bay Cuba. In September and October she participated in three NATO exercises "Seaspray " "Strikeback " and "Pipedown " as flagship for the Underway Replenishment Group. During the following year she continued to operate along the east coast and in the Caribbean Sea undergoing a yard overhaul and training at Guantanamo Bay. In November 1958 Suribachi sailed on an extended tour of duty with the 6th Fleet. She cruised the Mediterranean until May 1960 taking time in June 1959 to serve as flagship for Service Squadron 2 during Operation Lantflex.

Suribachi deployed to the Mediterranean two more times from February to August 1961 and from August 1962 until the spring of 1963 before entering the yard of the Maryland Shipbuilding and Drydock Co. at Baltimore Md. for conversion to a Fast Automatic Shuttle Transfer ammunition ship (AK-FAST). At that time she was placed in commission in reserve. In addition to the FAST conversion Suribachi received a helicopter platform on her fantail enabling her to conduct vertical replenishments for the fleet.

On 15 December 1965 the ammunition ship was placed back in full commission at Norfolk Va. where she continued fitting out until the beginning of February 1966. She then got underway for five weeks of shakedown training in the Caribbean area out of Guantanamo Bay. From mid-March to mid-April she and Dewey (DLG-14) conducted the operational evaluation of her newly installed FAST system in the vicinity of Mayport Fla. In June she returned to her schedule of 6th Fleet deployments and Atlantic coast Caribbean operations. Between June 1966 and June 13 1972 she made four more Mediterranean cruises during which she visited many of the interesting ports along the littoral of the "middle sea." Her mission as always was to maintain the logistics support for the fleet at a high level of readiness. When not deployed with the 6th Fleet she returned to operations along the eastern seaboard and trained in the Caribbean

On 16 June 1972 Suribachi negotiated the locks of the Panama Canal and joined the Pacific Fleet. Ten days later she arrived in Pearl Harbor. After an overnight stop she continued on to the operating area off the coast of South Vietnam. From mid-July 1972 until 8 February 1973 Suribachi rearmed and refueled the combat units of the 7th Fleet. She departed from the combat zone fairly frequently for port periods at Subic Bay in the Philippines and for a visit each to Hong Kong and Sattahip Thailand. Her periods away from the action zone were brief in every instance three or four days at most.

On 8 February 1973 she entered port at Subic Bay and on the 16th sailed for Yokosuka Japan en route back to the United States. Following stops there and at Pearl Harbor Suribachi re-transited the Panama Canal in mid-March and rejoined the Atlantic Fleet. Since returning to the east coast Suribachi has resumed her old schedule of operations in the western Atlantic-Caribbean area alternated with cruises with the 6th Fleet. She has made one Mediterranean deployment from January to June 1974 and was operating with the 2d Fleet as of March 1975.


Add Your Name to the
AE-21 Crew Roster