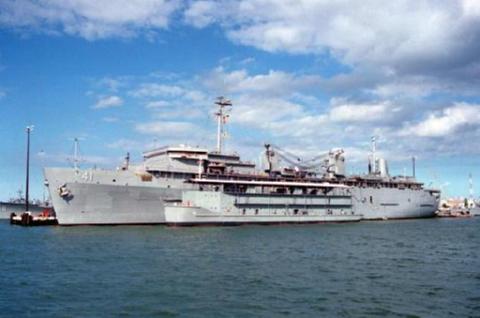 The USS YELLOWSTONE (AD-41), a Yellowstone-class destroyer tender, was commissioned on 28 JUN 1980. USS YELLOWSTONE was built by National Steel and Shipbuilding Company in San Diego, California, and after fit out and shake down steaming, moved to her homeport of Norfolk, Virginia. In 1981 she "turned to" with the first of a series of deployments that make up the work of a destroyer tender - supporting the fleet where needed. Until her decommission YELLOWSTONE deployed to the Mediterranean, North Atlantic, Caribbean and Indian Ocean during Operation Desert shield and Desert Storm. The early 1990s brought a draw down of the US Navy, and excess destroyer tenders. USS YELLOWSTONE served her country for just 15 years, 7 months and 3 days, until decommissioned on 31 JAN 1996. YELLOWSTONE is laid up at the Naval Inactive Ship Maintenance Facility at Fort Eustis, VA


The third Yellowstone (AD-41) was laid down on 2 June 1977 at San Diego, Calif., by the National Steel and Shipbuilding Co.; launched on 27 January 1979; and sponsored by Mrs. Donald C. Davis, the wife of Admiral Donald C. Davis, the Commander in Chief of the Pacific Fleet. Yellowstone is slated to be delivered to the Navy in mid-January of 1980 and should join the fleet in the middle of the year.


Add Your Name to the
AD-41 Crew Roster