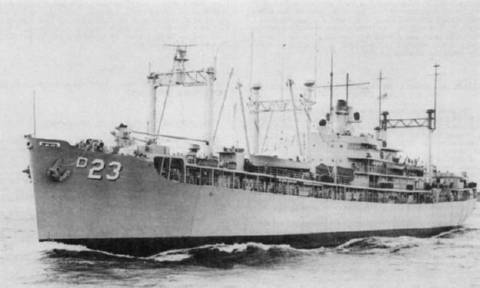 
The third Arcadia, was laid down by Todd Shipyards Corp. on 6 March 1944 at Los Angeles, Calif.; launched on 19 November; sponsored by Mrs. Edward L. Beach, the widow of Capt. Edward L. Beach; fitted out at Terminal Island, San Pedro, Calif.; and commissioned on 13 September 1945, Capt. James M. Connally in command.

Following shakedown training off San Diego, the destroyer tender departed the west coast to join the Atlantic Fleet at Charleston, S.C. The war had been over for several months when she arrived at her berth on the Wando River on 1 December. Arcadia served as tender to destroyers joining the inactive fleet at Charleston, and she also developed the official program for decommissioning and inactivation to be used by tenders of her own class.

Arcadia was placed in commission, in reserve, on 7 February 1947 and served as accommodation vessel for Submarine Group 1 of the Charleston group, Atlantic Reserve Fleet. She was placed in full commission on 1 August 1951 and assigned a new home port, Newport, R.I., where she tended destroyers in the Narragansett Bay area.

Arcadia supported the Atlantic Fleet with repair services into the 1970's. She served as 6th Fleet destroyer tender during many deployments to the Mediterranean where she made working visits to such ports as Naples, Italy; Cannes, France; Valencia, Palma, and Barcelona, Spain; Lisbon, Portugal; Piraeus, Greece; and Istanbul, Turkey. The tender visited the Caribbean while exercising in yearly "Springboard" operations in the 1950's and 1960's, calling at ports in the Dominican Republic, Puerto Rico, Jamaica, and the Virgin Islands.

In October 1964, Arcadia steamed to Orange, Tex., to strip five mothballed high-speed transports for parts needed by active duty destroyers. The six-week trip netted nearly $800,000 worth of parts and equipment for use by the ships of the Atlantic Fleet.

Although she serviced destroyers primarily, Arcadia was called upon in November 1966 to repair the aircraft carrier Saratoga (CV-60). The tender departed Newport on 19 November for the cruise to Mayport, Fla., where she remained until 13 December completing the repair work needed following a Mediterranean cruise. She returned to Newport and resumed her normal operations.

In both 1966 and 1967, Arcadia made cruises to Key West and Mayport to provide services to Destroyer Division 601, Destroyer Squadron 16, and reserve training destroyers from various ports in the Gulf of Mexico.

Arcadia was decommissioned on 28 June 1968, berthed in the National Defense Reserve Fleet contingent in the James River on 15 November, and formally transferred to the Maritime Administration on 30 June 1969. Her name was struck from the Navy list on 1 July 1973, and she was sold to Levin Metals of San Jose, Calif., in October 1975, and scrapped.


Add Your Name to the
AD-23 Crew Roster