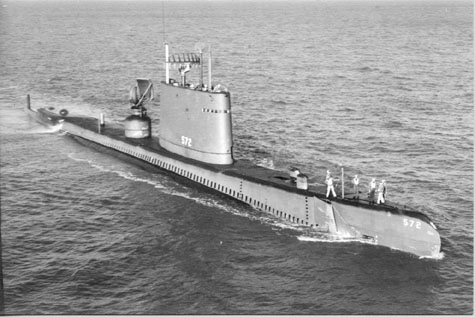 Final Disposition: Sunk as target May 2007

Sailfish was the first submarine built expressly for radar picket service. She and sister ship, Salmon, were also the largest conventionally powered submarines in the United States Navy and, to the present, still hold that distinction. Following trials off the New Hampshire coast, Sailfish conducted a shakedown cruise in the Caribbean before joining Submarine Squadron (SubRon) 6 at Norfolk, Va. In July 1957, she began her first extended deployment with the 6th Fleet in the Mediterranean. She returned to Norfolk in October and, through the fall of 1958, engaged in local operations, with occasional visits to Caribbean ports. In December, she commenced a seven-month conversion and overhaul at Portsmouth. In April 1959, while the yard work was still in progress, she was transferred to SubRon 10 at New London, Conn.

Sailfish resumed coastal operations out of New London in July, participating in fleet and NATO exercises, providing qualification training for prospective submarine officers and crews, and sharpening her own battle readiness. On 3 February 1961, Sailfish was reclassified SS-572, and assumed the duties of an attack submarine. By September 1962, she was preparing for her second Mediterranean deployment and departed New London on 10 October. She operated with the 6th Fleet over the next four months and returned to New London in February 1963, where she participated in local operations through the rest of that year and 1964.

In January 1965, Sailfish was transferred to Philadelphia where she entered the Naval Shipyard for extensive "FRAM II" conversion. Thirteen months later, in February 1966, she left the navy yard presenting a more sleek, streamlined appearance, broken only by the deck-mounted fins of the new "puffs" sonar system. These new fins duplicated on a miniature scale the form of her conning tower, giving her the dorsaled look of a large, beautiful fish, like the "sailfish" for which she was named. Following an exhaustive checkout of her newly acquired systems and a period of refresher training, she deployed in July for her third Mediterranean tour. After four months, she returned to New London and local operations.

On 1 November 1967, she was assigned to SubRon 8 and joined the submarines of Submarine Division (SubDiv) 82, specialists in antisubmarine warfare. She operated out of Groton, Conn., until July 1968; then underwent overhaul into February 1969. On 1 July, she was ordered to the Pacific and assigned a new home port, Pearl Harbor. Sailfish departed New London on 14 July; transited the Panama Canal; and, after a brief visit to Acapulco, Mexico, proceeded to Hawaii. From Pearl Harbor, she sailed on 9 October for deployment with the 7th Fleet in the western Pacific. Sailfish operated out of Yokosuka, Japan. In January 1970, she participated in Allied exercises off Taiwan and Okinawa; in February, she conducted joint training operations with Republic of Korea Navy units; and, in March, she operated with units of the Japanese Maritime Self Defense Force. On 26 May, Sailfish returned to Pearl Harbor and spent the remainder of the year there in training operations and upkeep.

On 8 February 1971, Sailfish departed Pearl Harbor for her second WestPac deployment. For over six months, she cruised the western Pacific. In late May, she joined units of the United States Navy and of the Japanese Maritime Self Defense Force in HUK ASWEX 3-71. By mid-July, she was in the Mindanao Sea participating in another antisubmarine exercise, this time with units of the Philippine Navy. Sailfish spent a week in Brisbane, Australia, before returning to Pearl Harbor, on 28 August, for overhaul.

The submarine underwent regular overhaul from 20 October 1971 until 14 July 1972. Between July and December, she operated between Hawaii and the California coast, engaged in trials and type training. On 1 December, Sailfish departed San Diego for Yokosuka, Japan, and her third WestPac cruise. She plied the waters of the western Pacific until 4 May 1973, when she departed Subic Bay to return to the United States. She stopped overnight, on the night of 19 and 20 May, at Pearl Harbor; then continued on to San Diego. For the rest of 1973, she operated off the California coast, out of San Diego. As of May 1974, Sailfish continues to operate out of her home port of San Diego.


Add Your Name to the
SS-572 Crew Roster